The Council of Governors (COG) on Wednesday threw its weight behind embattled Nairobi governor Mike Sonko, after the county head came under fire for nominating a deputy, amidst ongoing investigations into his conduct in office.

Sonko, who spent four days behind bars in December after he was arrested on corruption and abuse of office charges, was released upon stringent conditions, including staying away from office, an evidence protection request on the part of Director of Public Prosecutions Noordin Haji.

However, according to Haji, Sonko’s Monday act of nominating one Ann Kananu Mwenda as his deputy was in violation of his bail terms.

In their Wednesday statement, Sonko’s 46 counterparts from around the country hailed him for acting as per the requirements of the Constitution by nominating the Disaster CEC for Nairobi County to fill the deputy governor void.

“We are glad that Governor Sonko has exercised his constitutional mandate as the head of Nairobi County to nominate a deputy governor who will assist him to discharge his duties,” the COG said in the statement signed by chair Wycliffe Oparanya.

Ignoring haji’s protests, the COG further urged the Nairobi County Assembly to expedite the vetting process for the nominee so as restore normalcy in the operations of the troubled capital city. 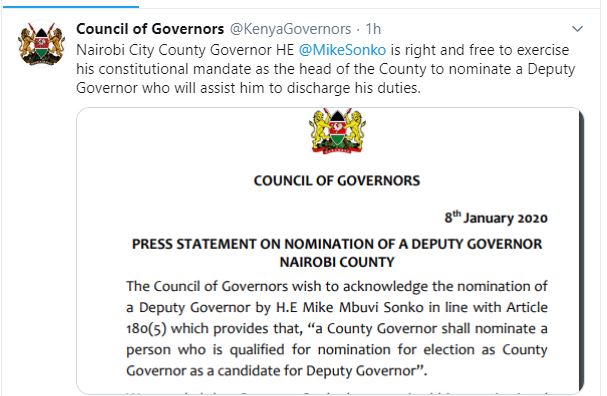 Sonko’s nomination of Kananu as his deputy is in line with one of the recommendations contained in the Building Bridges Initiative (BBI) report prepared by a team led by the DPP’s father, Noordin Haji, of appointment of a member of the opposite gender by a serving governor should the position fall vacant.

The technocrat, however, resigned from the position in February 2018 citing a difficult working relationship with Sonko.