The parents held demonstration outside the school compound where they accused the school Principal, John Ayier and some members of the Board of Management (BoM) of mismanagement and corruption leading to its decimal academic performance.

Speaking to the press during the protest Parents Teachers Association (PTA) member, George Odhiambo, said that the Institution has been recording poor academic results in KCSE since 2014 when the first lot of candidates sat for their national exams.

Odhiambo further revealed that the school has never produced candidate who qualified with a direct entry to university from the year 2014.

“The highest grade that the school has ever produced is C- (minus),” Odhiambo lamented.

Odhiambo disclosed that the situation has led to some parents transferring their children from the school to other institutions. 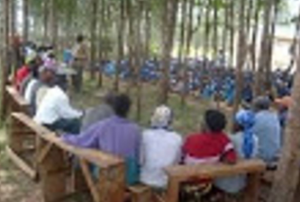 He added that parents are determined not to let the Principal be in the school, saying that they have signed a petition that has been presented to relevant government bodies including the Teachers Service Commission (TSC) for action.

“We have appealed to the TSC to intervene on the matter because the Principal has declined to implement changes that we recommended to him, ” Odhiambo said.

On his part, the School Principal said that some of the issues raised by parents have been forwarded to the Ministry of Education which is yet to act.

Ayier said that school management has tried to solve some of the issues raised, citing   how to improve its academic performance through meetings which parents failed to attend.

“When I last called for meeting with the Board members, only a few parents showed up for the meeting. In fact those who are now protesting are not the real parents of students who study in this school,” Ayier said.

While the Homa Bay County TSC Director, Grace Amira, said her office is aware of the grievances that the parents have raised and they are working on the issue.

She further said she is waiting for a report from her officers before she acts.

Amira said among the steps TSC intends to take   to improve the academic performance of the school includes, posting more teachers and transferring those who have stayed in the school for more than five years.