It is a dark Christmas for over eight hundred casual workers in Taita-Taveta County after they were sacked by the County Government barely a week after the findings of a staff audit report were made public.

Hardest hit in the purge is the critical Health Department where over 200 casual workers have been sent home, most of the cleaners, clerks, and cooks.

Other sectors have not been spared either. Early Childhood Development Education (ECDE) sector has also seen hundreds of teachers across the four Sub-counties go home after their contracts with the County were terminated.

In a letter dated November 22 and signed by the Acting County Secretary, Liverson Mghendi, all casual employees were informed that they would cease to be county workers as from January 1, 2020.

They were, however, urged to apply for vacancies when the County Public Service Board advertises on a departmental needs basis.

“This is to notify you that beginning January 1, 2020, you will no longer be a casual employee with the County Government of Taita-Taveta,” read parts of the notice.

The sacking letters sent to the workers and signed by the Chief Officer in the Health Department, Philomena Nkirote, alleged that the exercise was meant to allow County Public Service Board to ‘regulate and bring sanity’ to the engagement of county staff.

The letter said it serves as a one-month notice to all the affected workers, a period that would be used to hand-over all relevant documents to principal officeholders.

“You are also encouraged to apply for any position that you feel qualified when vacancies are advertised by the board,” the letter concludes.

The sacking has come as a shocker to most of the casual workers who felt the audit report had adequately weeded out the headache of ghost workers.

“This is devastating. What will we do when January comes?” wondered a Voi ECDE teacher who declined to be named for fear of victimization.

County insiders, however, say hiring the casual workers was the most abused privilege by officeholders in the county departments.

There are claims that there were no specific hiring models by officials which led to the over-staffing of casual workers in some departments.

In October this year, the County conducted a staff audit on all its workers. Huge wage bills had triggered alarm bells in the County Treasury leading to calls for audits to generate a report on staff establishment.

The County conducted another audit in November to include staff members omitted during the first audit.

According to the report, 3,216 workers were in September’s  payroll but only 3,120 appeared for the headcount. The audit also found that some staff were not paid from the centralized master payroll making it hard to ascertain the amounts spend on salaries.

The audit also found that 520 casual workers were hired irregularly. In the health sector, 103 workers were found to have been hired directly by the management of health facilities in far-flung rural areas without the approval of the County Public Service Board. 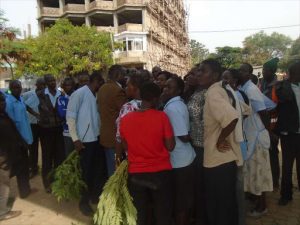 “These are some of the anomalies they are trying to sort out,” disclosed a Senior County official.

However, there are fears that long-serving casual workers who were legitimately employed would be disadvantaged for being forced to re-apply afresh and compete for the few vacancies with new applicants.

Mr. Hajji Mwakio, Chair of the Taita-Taveta Human Rights Watch, said long-serving casual workers should not be made to apply. He stated that the County Government had data on such workers and should be absorbed automatically without the rigors of applying for new vacancies.

“Some casuals have worked for ten years and the County has that data. Why should the same County make such workers apply for new jobs?” he posed.

He further noted that the County Legal Advisor should lead to advising the County against violation of labour laws, including breach of worker’s rights.

Make also called upon the County labour office to shield workers who were legally employed against mistreatment under the guise of streamlining service delivery.