The Sagana meeting saw President Uhuru Kenyatta meet with over 3,000 politicians last Friday from the Mount Kenya region, in a bid to unify the area ahead of the 2022 general election and also drum support for the Building Bridges Initiative (BBI).

Uhuru, however, seemed to have failed in his bid as the meeting appears to have emboldened politicians from the region allied to the Deputy President William Ruto who belong to the Tanga Tanga camp.

That evening, as Kenyans were still synthesizing the message from Sagana, Tanga Tanga politicians from Central led by Gatundu South MP Moses Kuria mocked Uhuru’s call for unity when they shared a similar photo on Facebook captioned “Sagana was good. The region is united”. Missing from the photo were politicians from the region who belong to an opposing camp, which supports the handshake, Kieleweke. 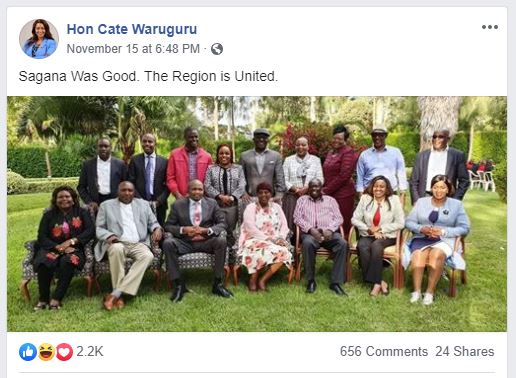 During the burial of the brother to Kandara MP Alice Wahome in Murang’a County, on Wednesday, Members of Parliament (MPs) from the Tanga Tanga camp criticised the BBI saying that it is not in the best interest of the Mt Kenya region.

Mathira MP Rigathi Gachagua said the BBI report should also include better prices for milk, coffee and tea besides expanding the executive

It has also emerged that Members of Parliament (MPs) from the Ruto allied brigade, according to media reports, are planning to counter the Sagana meeting in the coming days.

According to a Thursday report by the Daily Nation, the MPs are planning a meeting to re-strategise the Mt Kenya region politics.

On Sunday, The Standard reported that Ruto allies in the region were back to the drawing board to reclaim the ground shaken by Uhuru.

The publication said that the pro-Ruto team met at the home of Rigathi to re-look their strategy.