Who new that a humble man who used to run two miles to school on a daily from a small village in Kenya would break a record that would unite the world in tremendous joy using the quote “No human is limited”, which is now a national symbol of courage in going for achievements?.

On Saturday,Kenyan marathoner Eliud Kipchoge ran 4.4 laps of a Viennese road circuit in an elaborate, highly-controlled bid to cover 26.2 miles in just over 1 hour and 59 minutes. Why? Because Ratcliffe and Kipchoge both happened to be obsessed with the idea at roughly the same time.

“There’s no clear strategic direction that’s led to the choices that have been made,” said Fran Millar, the CEO of Ineos Sports. “Jim’s a very passionate guy…He’s at a stage in his life where I think he’s making decisions based on what’s a fun, interesting, cool thing to do”,The Wall Street Journal detailed.

According to the international publication, the 66-year-old British billionaire behind this sprawling and seemingly random collection of goals who made his fortune by founding the Ineos petrochemical company, had a deep love of sports and cash to burn.

An initial plan was to help a British sailing team challenge for the America’s Cup. Then the plan was also to win the Tour de France. And after that, the plan expanded to buying a soccer club on the French Riviera and to the current, take down one of the last great barriers of human athleticism.

The tycoon is a successful owner of a sailing team, a cycling team and a soccer team.

Sir Jim Ratcliffe ensured that Eliud Kipchoge was delivered to Vienna, Austria in total comfort by sending him a jet operated by two pilots and said to be worth over Sh 2 billion.

Jim has since reacted to the Kenyan marathoner’s record, he revealed that he could not believe that Eliud Kipchoge had pulled off the feat in Vienna, Austria. 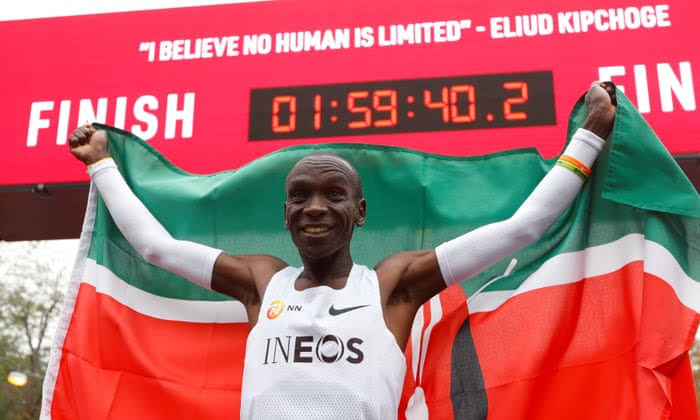 “That last kilometre, where he accelerated and he came through on his own, it was super-human really. I can’t believe he ran the first half-marathon in under an hour, and then he had to do that again”.

Kipchoge become the first man to run the 42-kilometre distance in under two hours and setting  a record of 1.59.40. Well, if you didn’t have a great goal in life hope you are inspired now by both Jim and Eliud!