Deputy President William Ruto announced that his rivalry with ODM leader Raila Odinga was over.

Speaking in Kisumu on Thursday, the DP was cheered by the crowds after he saluted them in the local Dholuo language. He further stated that their differences politically had been set aside.

The crowd cheered at the DP when he addressed Raila by his political nickname ‘Tinga’.

DP Ruto assured Kenyans that the three would work together as they were on the same journey to unite the country.

Earlier on Raila had posted pictures on his Twitter account after he received the DP at the Kisumu International Airport.

Sharing light moments with Deputy President @WilliamsRuto as we await the arrival of President @UKenyatta at Kisumu International Airport. pic.twitter.com/ZCWzK2rWPi 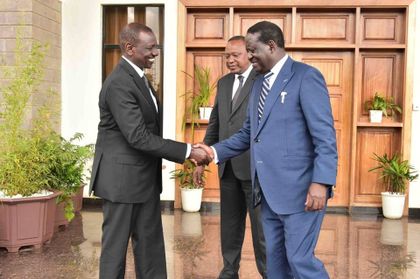 This was the first time that Mr Odinga was formally hosting the President and DP Ruto in his backyard since the March 9 handshake which changed the political relationship between the two leaders.