As a frequent follower of Mathare United in the Kenyan Premier League, I could not help but notice the noise levels rise from fans once a particular player was on the ball.

The player in question was none other but 22 years old Tyson Otieno. Born and bred in Lucky Summer estate, which is a walking distance from the Moi International Sports Center Kasarani.

The fans who loudly cheer and shout his name whenever he is on the ball are friends and family he grew up with and he says they expect him to make them proud, especially when Mathare United plays at the MISC. 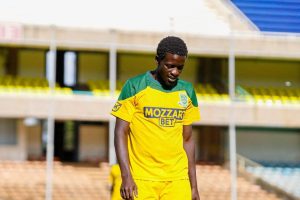 “Most of those people are my mates and they expect me to lighten their moods whenever we play at home. I try to do that most times, they give me lots of morale and confidence and I am so proud of them,” he explains.

The forward who can play in any position across the front-line started his playing career at the tender age of 10 when he used to feature for Outreach Rangers before his talents took him to Red Commandos and later Baba Dogo United before he made the big switch to Mathare United.

He has seven goal contributions for his team this season with four assists and three goals before the season was brought to a halt by the Corona epidemic. He is however hungry for more and will set out to add on to that once normality in the world resumes. 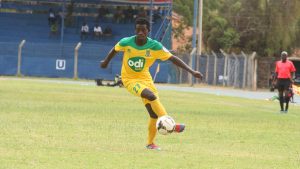 “My goal for the season is to record ten assists and ten goals while also helping the team finish in the top four positions. It is not easy especially with the level of competition in the league but it is also very doable”

Mathare United made a managerial switch at the start of the season as former manager Francis Kimanzi was replaced by his assistant Salim Ali but Tyson insists that on the pitch, nothing has changed.

“The playing philosophy at Mathare United has never changed so even with a different manager, the tactics are the same. The only difference is maybe the personality of the coaches, which differ a little,” he clarifies.

Locally, Tyson draws his inspiration from Belgium based Harambee Stars midfielder Johanna Omollo who also grew up in Nairobi before making the move abroad.

“Johanna Omollo is my mentor and I would one day like to play abroad like he does now and also for the National team Harambee Stars. The way he carries himself is how a true professional should and I look up to him.”

On the player he looks up to globally, Tyson picked the best of the bunch.

“Lionel Messi is a dream player and I would one day like to be as good as he is. My aim is to play for Barcelona before my career ends and I have full faith that through hard work, I Will achieve that,” the forward concludes.