Deputy President William Ruto has refuted reports that he was snubbed at a meeting convened by President Uhuru Kenyatta on Thursday at State House in Mombasa.

Taking to Twitter on Saturday morning, the DP dismissed a report by the Saturday Standard that he was in Mombasa at the time of the meeting saying that he was working in his office in Nairobi.

“Kenyans should ignore this choreographed, paid-for propaganda nonsense. I was in the office the whole day never in Mombasa.” Ruto tweeted.

Kenyans should ignore this choreographed, paid-for propaganda nonsense. I was in the office the whole day never in Mombasa. pic.twitter.com/YlP7KYBFmm

Ruto’s no-show at the Mombasa meeting where Uhuru held talks with 24 county bosses continues to raise speculation over his isolation in the Jubilee government.

According to the local daily, the DP flew to Mombasa on Thursday morning, arriving in the Coastal city at 10 am, the time the meeting was scheduled to begin.

However, Ruto reportedly did not attend the meeting and opted to fly back to Nairobi on the same day to meet leaders from Kisii and Nyamira.

Emmanuel Tallam, Communication Director at the DP’s office also confirmed that his boss was in Nairobi on Thursday afternoon where he met the Abagusii community leaders.

“The DP had informal meetings in the afternoon with leaders from Kisii and Nyamira MPs and grass-root leaders’ the whole afternoon,” Tallam said. 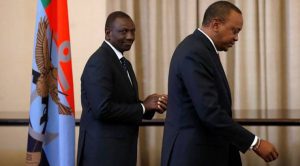 This came days after he was denied access to his official residence in Mombasa.

The agenda of the meeting, however, remains unclear even as it emerged that several governors allied to the DP camp were absent.

But according to Murang’a Governor Mwangi wa Iria the chat with the President was part of the festive season meant “to engage with the president.”

Leaders allied to Tanga Tanga faction in the Jubilee party have been expressing their displeasure with the way some government officials have been treating the DP.

“This is the moment. This is the time. Let’s live it. Let’s record it. History will be kind!” Elgeyo Marakwet Senator and Senate Majority Leader Kipchumba Murkomen tweeted on Friday, January 17.

This is the moment. This is the time. Let’s live it. Let’s record it. History will be kind!