Just like a number of citizens, Murkomen is not pleased with the manner in which Miguna has faced frustrations during his journey back to Kenya. 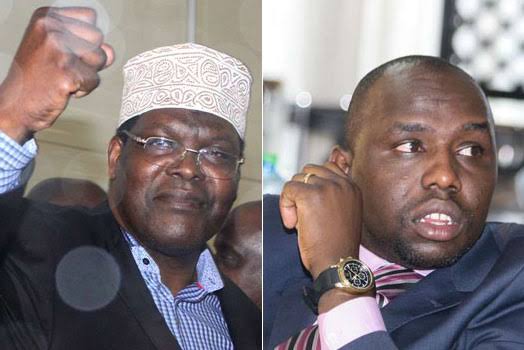 On Wednesday morning he weighed in on Miguna’s saga but his boss, Deputy President William Ruto was dragged into the blame game from netizens.

Murkomen shifted the blames to cabinet secretaries whom he accused of disobeying the presidential order to facilitate Miguna’s return.

Why DP ? If the Cabinet secretaries and other state officers are frustrating a Presidential order will they obey the assistant ? https://t.co/KKG0riX6ZM

Additionally, the lawmaker termed the events preventing the lawyer from returning to his motherland depict the hypocrisy of Kenyan politics.

He further stated that failure by the government to enable the smooth landing of Miguna shows the Ugly BBI and handshake initiatives.

The frustrations @MigunaMiguna is facing epitomizes the hypocrisy of Kenyan politics of “change”& “Kenya Mpya”. It paints ugly BBI&handshake. If we can’t embrace MM with his divergent ideas how shall we pretend to unite a nation?MM should facilitated as we should&not frustrated

A section of citizens questioned the Elgeyo Marakwet senator on the role he could play to save doomed general.

He responded to critics saying that he has given Miguna counsel and he would do anything else for him under his official capacity.

Thank you Sophie. If my office was required to do anything for MM or any other citizen I would have done it.I have given my counsel. The courts shouldjail government officials who are In contempt of court orders.There is no collective responsibility in violating the constitution. https://t.co/3cjZffYpsc

Miguna himself insists that President Uhuru is the mastermind of the red alerts issued to him, with Raila Odinga as his accomplice.

The self-declared general has accused the two leaders of violating his human rights and also his rights as a Kenyan citizen.

Fellow Kenyans: Let us be honest and admit the obvious fact that the person violating my rights and preventing me from entering Kenya in defiance of numerous court orders is Uhuru Kenyatta – urged on by Raila Odinga. Uhuru Kenyatta has not complied with any court order. None.