And on Tuesday night, as many Kenyans converged at different joints to usher in the new year 2020, the vocal MP was at it again!

Taking to his Facebook account shortly after welcoming the new year, Kuria, who according to the views of many seemed to be under the influence of something, caused an online uproar after making a controversial post.

In his post, Kuria announced that he was planning to quit and deactivate all his social media accounts, except WhatsApp for the rest of the year 2020.

The MP also announced that he was going to quit drinking alcohol for the rest of the year, promising to concentrate more on serving his constituents at the ground.

“Happy New Year 2020 good people. For those who thought they know me:

1. I am ‘deactivation’ my Social Media Accounts (Except Whatsapp) throughout 2020. See you in 2021. This is my last post of the year

It was, however, the formation of his grammar that left many Kenyans wondering and questioning his state of soberness, with many arguing that the MP was just under the influence and was not in any way going to fulfil his promises.

Kimani Wa Nyaga Point No.1 betrays you already
That English is the same my uncle uses when drunk ” I am deactivation my social media”

OuKo JoHn I am deactivation ? written under alcohol Toxicity Guok….. You are under the influence of Alcohol 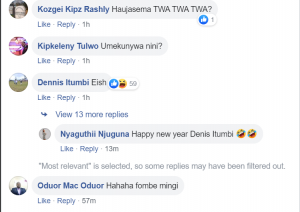 Kalya Kiprono He is deactivation his social media until 2021

Cde Rosco That DEACTIVATION is intentional to keep your highly petty followers busy, I know they will rant about it the whole year while you are away. Otherwise happy and prosperous 2020 Musa

Rufus Murithi You are not alone mheshimiwa,we have made such and many more over the years but we break them without any apologies. You too will.HNY.

Komen SK WhatsApp is a messenger. Not a social media platform. Anyway, don’t deactivation your capacity to differentiate the two. 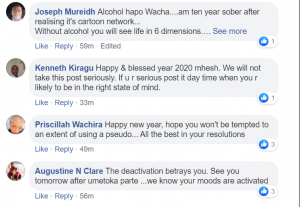 Augustine N Clare The deactivation betrays you. See you tomorrow after umetoka parte …we know your moods are activated

Harrison Kimathi You are already drunk, maybe to close the year.
All in all, resolutions are allowed. Discipline to see them through is another journey of its own.
Blessed 2020

Jim Basil Please make this post when you are sober… I am certain you are under the influence of some hard substance. 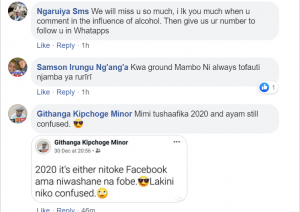