Self-styled revolutionary and activist Miguna Miguna is a man who is never far from controversies.

Recently, Miguna announced that ‘due to public demand’ he will return to the country from Canada on Tuesday, January 7, 2020, and not January 11 as he had announced earlier.

The announcement from the exiled lawyer elicited expectant reactions from the majority of Kenyans, but his latest antics seem to have gained him more foes than friends online.

The Canada-based barrister has for the better part of Monday, December 23, been harshly criticised by a number of Kenyans for going on a blocking rampage. 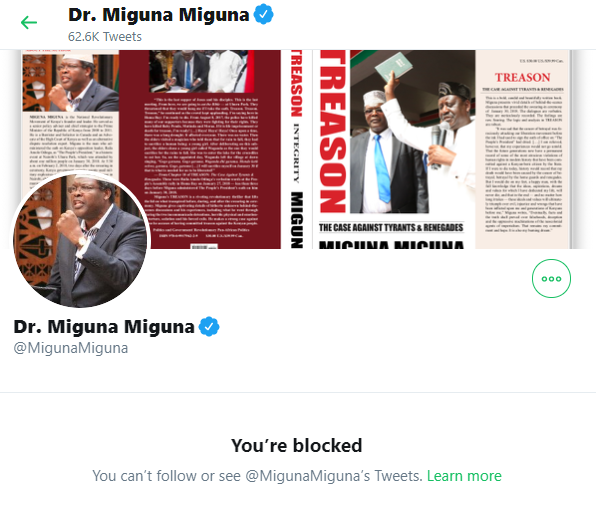 Twitter users, who also shared screenshots to prove their claims, blasted Miguna for being a coward who hates to be corrected.

“How can a coward “leader” who hates to be corrected lead others into revolution? He can’t just withstand the truth, he hates critiques,” a Twitter user Gallardo said.

“Who will receive Miguna Miguna at JKIA and walk with him to Uhuru park. He has blocked almost everyone. Or it’s just cartels,” Enoch Cheruiyot added.

MIGUNA MIGUNA there must be a mistake I’m one of your own, a day never ends without typing despots and Viva on my keyboard, how comes I’m blocked pic.twitter.com/7rWtNDZUrR

Miguna Miguna is just a toothless dog barking. Waiting to see who will meet him at JKIA when he’s blocked all #KOT

Miguna Miguna is a “Twitter Despot” he blocks anybody that disagrees with him. If all guys blocked by miguna were to recieve him at the airport, it would send a clear message to the DESPOTS. But his intolerance cannot allow you like him

Miguna, who was first deported in February 2018 days after his arrest over his role in the mock swearing-in of ODM leader Raila Odinga, recently stated that he will board a Lufthansa Flight LH 590 and land at the Jomo Kenyatta International Airport (JKIA) at 9:25 PM East African Time on January 7, 2020.

The self-styled General’s last attempt in 2018 to return to Kenya through JKIA was futile after he was denied entry and spent several hours at the airport’s detention facility.

The High Court has maintained that Miguna is a Kenyan by birth and holding a Canadian passport does not deny him his birthright.