On Friday, there was an exchange of words between Cabinet Secretary, Trade and Industrialisation Peter Munya and Kikuyu MP Kimani Ichung’wa over the latter’s remarks on the dairy industry in Kenya.

Ichung’wa had earlier on in the day reacted to a Daily Nation newspaper article on how farmers had resolved to pour milk over low prices and lack of access to markets while tagging Munya and CS Eugene Wamalwa on his Twitter account.

“These farmers will need school fees in January. They depend on their produce for the same. After the floods, there’s likely to be a drought. This produce could save lives then, ” the Kikuyu legislator said.

Munya, on the other hand, reacted and replied to Ichung’wa referring to him as a ‘rent seeker.’

“Ichung’wa is a rent seeker. Let him take his rent-seeking missions to Kiunjuri. Inspirations from Sugoi will not improve dairy industry.” Munya said

In what was ostensibly meant to be a reply that would mute Ichung’wa, the CS was in for a rude shock as an attempt to humiliate the MP misfired.

In reply, Ichung’wa said, “No Waziri. I am a LANDLORD and a representative of the people. I raise and address issues that are of concern to the people. If you could kindly do what you have been hired to do also and address the issue at hand leaving out your emotions/MAKASIRIKO & politicking? (sic)”

Kenyans online were also not happy with the CS some noting that it was not right for him to use that kind of language.

Is this really the CS's official account or it's fake? If it's real, this is a very annoying response to a very serious matter regardless of who raised it.

@PeterMunya you mean you have become this disrespectful. What do you guys smoke nowadays? I have never witnessed arrogance in any other government like the css of jubilee.

You are part of the party that for 7 yrs has not sought any remedy for this occurrence.
You are a leading cheerleader of the president as his family wrecked havoc in the milk sector.
You still sit in Parliament though and you can do something today that is beyond tweets

Senate Majority Leader Kichumba Murkomen, on questioning Munya what he meant by saying Sugoi, his tweet (Munya) was mysteriously deleted from twitter but Opera News had the records.

Waziri what do you mean by Sugoi? The Deputy President’s home ? Cc @StateHouseKenya https://t.co/2vOnQ5UpsV 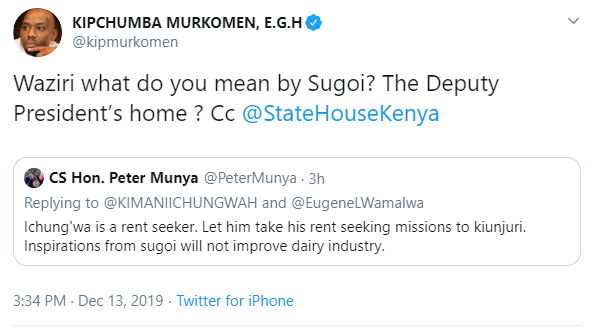