The move by Muslim clerics from Masalani, Ijara sub-county to ‘lower the cost of weddings’ in the area has elicited a sharp reaction from men suitors and clerics from Garissa.

In a resolution reached and read out by the clerics over the weekend during a public baraza in Masalani, the religious leaders resolved that the groom will be expected to pay a dowry of only four cows or Sh60,000 down from over Sh100,000.

The clerics also resolved that the bride’s dressing cost should not exceed Sh20,000. Currently, a bride’s dress can cost up to Sh50,000.

Those in support of the resolution said that it will reduce the burden and encourage young to wed while those opposed to it said it will demean the weddings.

According to a Garissa-based cleric from Masalani who requested anonymity, the clerics erred in making such a declaration on a sensitive matter.

“Making a marriage cheap will only serve to be counterproductive because we will end up seeing more divorce because it will be cheap,” he added.

Currently, most of the Somali weddings are lavish with the bride expected to pat with over Sh100,000 as bride price. The house in which the new weds will occupy is supposed to be furnished afresh and may cost up to a million shillings or more.

The religious leaders separately met with local elders and women who have been majorly blamed for influencing costly marriages. They resolved to abide by the resolutions fronted by the clerics. 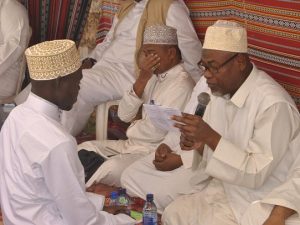 National Assembly leader Aden Duale recently waded into the matter saying Imams should be on the forefront to ensure weddings are affordable.

Duale said immorality has been on the rise while young men ripe for marriage have been asked outrageous demands such as buying of gold for the bride, exorbitant bride price as well as inflated dowries.

“Hundreds of youths have been coming to us so that we support their engagements. This is because the new culture has given men undue pressure,” Duale said.

Hundreds of area residents immediately took to social media with those in support welcoming the move saying it will reduce the burden on the newlywed while others, majority women, saying the religious leaders should not set a standard for marriage but only advice on the matter.

The Masalani cleric has since been sensitizing locals on their resolution in various mosques and public barazas.