The Olympic champion, on November 16, received a Ksh4.1million-worth Isuzu D-Max single cab pick-up for completing the 42km race in under two hours-becoming the first human being to ever make that record. 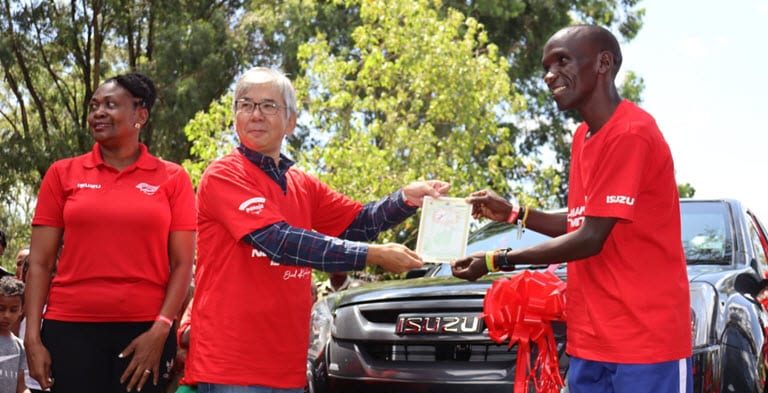 He expressed his delight while picking his gift and insisted that no human is limited to achieving any set goal.

“I went to Vienna to show the world that everything is possible and today I am here to collect my car (laughs). I am also working hard to achieve more feat,” he said.

“Eliud has been our brand ambassador and we have traveled a long journey with him. We decided to support Eliud because we saw we could give him an opportunity to win. In our organization we do not believe in limitations,” Kavashe said.

In the event held at Karura Forest, Kipchoge also led a two kilometers fun race before participating in a tree-planting exercise and later on he was also involved in a panel discussion on the topic ‘No Human is Limited’- Kipchoge’s mantra.

This was the second time Isuzu was gifting Kipchoge with a vehicle as he was also feted with an Isuzu D-Max double cabin pick-up worth Sh5.9m when he set a new world record of 2:01:39 at the Berlin Marathon in 2018.