Cross-dresser Robert Wanyeki famously known as Robettah has issued a warning to bloggers who have been writing stories about him referring to him as gay.

He said that no one was sure of his status apart from himself. He also paused the question as to why lesbians are openly accepted in society but when it comes to the issue of gays everyone talks ill of them.

“The society is fucked up. So it’s okay to be a lesbian or bisexual girl but dudes can’t have their way. Lesbian musicians can be so much accepted but when a boy sings blogs are all over the case with ‘gay singer Robettah’ ‘gay singer George baro’ grow up,” he said.

“No more ‘Gay Robettah’ nakieleweke. How do you even know if am truly gay? I am personally not a fan of labels. ‘Gay model Robettah?’ please kinembe zikafungwe when mentioning the ladyboy, nakitaeleweka.”

He has been making headlines with his controversial lifestyle with the last being a post he made on his insta stories saying that he was wanted to kill himself.

“Sasa nacheza defence. ooh my,nime-overdose..if I die tell my momma, my sister Malloy, my daddy and MY HARD EARNED  MONEY,” he said.

“Oh don’t forget my aunt and second aunt who brought me to this world. Death is a killer. Please take me or I will.I’m so tired Mungu wangu.”

He also argued with a South African stripper known as Abigael over one boy, Raphael, who is also Zari Hassan’s son. It is not clear whether Robetthah is hitting on Raphael but from the conversation, something is amiss.

” I have never met this boy but he keeps on sending me his pics. I even received a selfie from him yesterday and dick print pic,” he said.

“Stupid boy! I have a guy and am happy. Idiosyncratic losers and you Abigail with saggy lippy pussy I am not climbing this mountain again. Next time I’ll take action.” 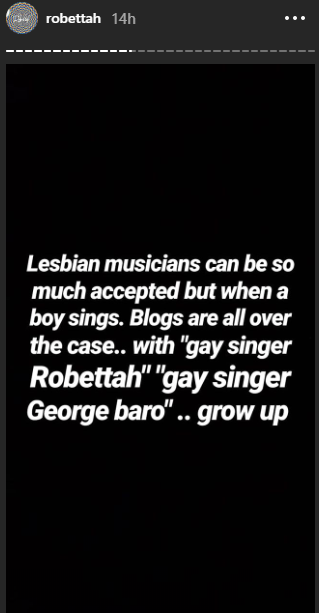 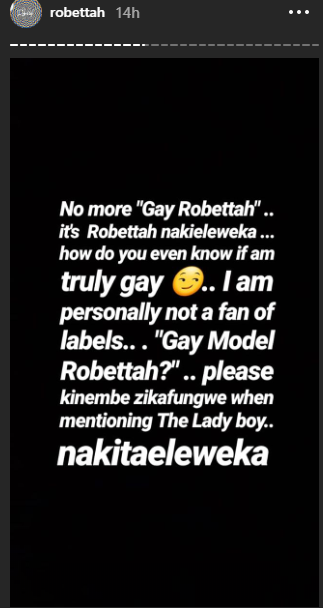