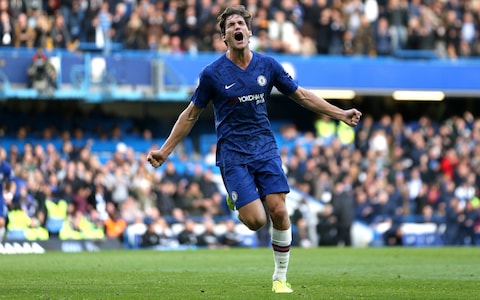 The Blues were the better side in the encounter but they had to wait till the 73rd minute to secure the winning goal thanks to Marcos Alonso.

Substitute Christian Pulisic picked Hudson-Odoi with a sublime cross, but the winger didn’t get a clear path, thereby smartly deciding to find a waiting Alonso, who drilled it low past Newcastle United keeper Martin Dubravka.

Full-time: Chelsea 1-0 Newcastle! @marcosalonso03’s strike secures the three points for the Blues, and that’s our fifth win in a row! 🔥#CHENEW pic.twitter.com/v51oc3HaOP

It was,however, a long-overdue goal going by the number of chances created by the hosts especially in the first-half, Tammy Abraham being very instrumental.

With three wins from the last four games with defeat to league-leaders Liverpool their only blemish, Chelsea had their heads raised for a win, and it was only a matter of when, when the second half commenced.

But Steve Bruce was all brave. He knew everything is possible due to the fact that he had already beaten Manchester United and Tottenham this season.

He brought in Andy Carroll for Miguel Almiron in search of stability but nothing much changed. In fact, it was only three minutes before Alonso scored the lone goal of the match.

Willian had just created a glorious chance with a terrific driving run from his own half, feeding Hudson-Odoi, who picked out Pulisic only for Dubravaka to thwart the effort.

Chelsea would then hang on the lead to the final whistle. Even the three minutes added by centre referee Andre Marriner never changed the score-line.