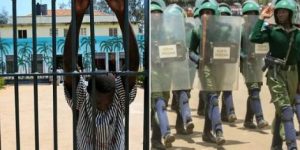 A convicted prisoner who had escaped from lawful custody at the Nanyuki prison yesterday was arrested by police hours after his daring prison break.

Daniel Mugambi was arrested late afternoon on Thursday by officers from Baraka police post after a tip-off from members of the public who had spotted him hiding at a nearby thicket and got suspicious that he could be an escapee from jail since he was adorning prison attire.

Laikipia County Police Commander Maxwell Nyaema said the officers cordoned off the area after getting information that he had been spotted and arrested him moments later.

“He was still wearing the prison uniform and had only managed to put on a black T-shirt on top so it was easy to notice him and that’s how we managed to re-arrest him few hours after he escaped,” Nyaema said.

Mugambi who was serving time at Nanyuki prison for stealing had escaped while working with fellow convicts at the correctional facility garden at 11.00 in the morning and efforts by the prison warders to track him down bore no fruits.

“The prison warders who were guarding the convicts working in the farm blew their whistles and fired shots in the air to draw the attention of fellow officers to help in the search for the escapee but he managed to outsmart them to enjoy his short-lived freedom,” Nyaema added.

The county Police Commander praised members of the public for their swift action in reporting the escapee and urged them to continue cooperating with authorities to stamp out crime in the area.

He revealed that the convict would be taken to court to answer to charges of escaping from lawful custody.