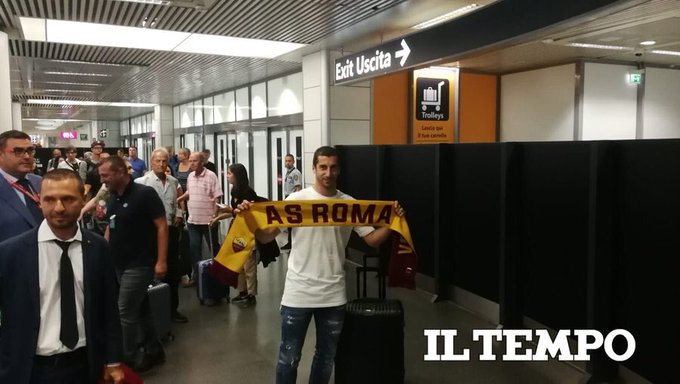 Armenia and Arsenal’s attacking midfielder Henrik Mkhitaryan is on the verge of sealing a move to Italian giants AS Roma. The midfielder joined Arsenal in a swap deal with Alexis Sanchez from Manchester United.

He time at the club has been disappointing and mostly found his position on the bench under Arsene Wenger who signed him and with Unai Emery too. He played his final Arsenal match in the last 20 minutes of a heated North London Derby with Tottenham Hotspur on Sunday at the Emirates Stadium.

Mkhitaryan was sensational for Borussia Dortmund before he signed for Manchester United and has since struggled to adapt to the English game. Interestingly, the other player in the now infamous Swap deal, Alexis Sanchez has also been loaned out to an Italian club.

Arsenal fans were happy to see the Armenian leave it seems..

Mkhitaryan gone, that’s another piece of deadwood in the bin.

Mkhitaryan from Arsenal to AS Roma, here we go! Done deal for a loan with buy option. The player will be in Italy soon to sign his contract. 🔴 #AFC #Arsenal #ASRoma #transfers

The Sanchez-Mkhitaryan swap deal has to be one of the worst deals made in the Premier League. Both now in Italy.

The worst thing with Mkhitaryan is because he used to be quality, every time he plays I think he might actually be good this time then get disappointed again.

All for shopping Mkhitaryan even if it leaves Arsenal a bit short in wide positions. It’ll mean a step up for Nelson or Martinelli, but Mkhitaryan is kind of like a precocious young player anyway- flashes of ability but inconsistent. Would rather get that from an actual youngster