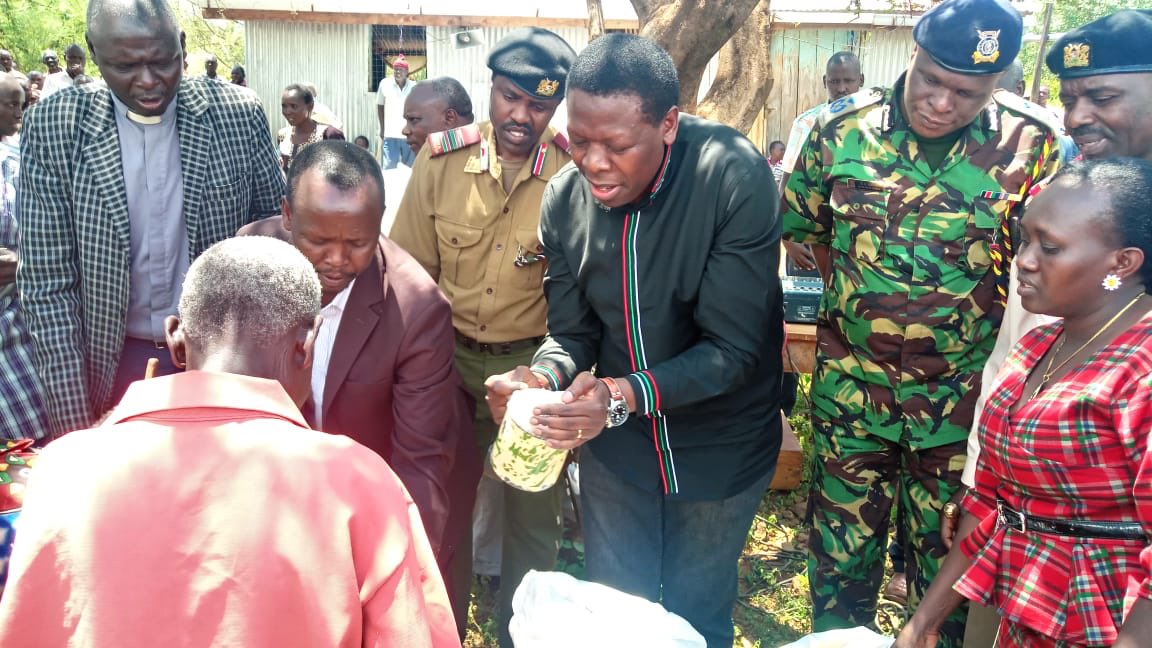 As one of the fourteen counties which are faced with starvation in the country, Baringo county is set to benefit from over 250,000 bags of maize every month from the national government as a way of addressing the biting hunger situation.

Announcing the good news on Thursday, Devolution CS Eugene Wamalwa said that the government is Keen to ensure that there is no single person who perishes due to hunger.

Wamalwa who was distributing foodstuffs to residents of Lenen village in Emining ward, Mogotio Subcounty also revealed that the residents will also get rice, beans, cooking oil and other assorted foodstuffs which will sustain them through the ongoing drought in most parts of the country.

As one way of curbing the looming hunger, Eugene said that the government had set aside a total of five billion shillings for the fourteen affected counties, saying that one billion shillings will be used each month for the relief food.

Informed the People of Lellen ⁦@Baringo_county⁩ of Paradigm shift by Government from Relief to Resilience as we operationalize NDMA Fund, new Irrigation Law and a common cash transfer platform for cash in lieu of food. pic.twitter.com/tcwBI1EPU0

“We want this to be the last year that the government is distributing relief food. It is regrettable that 50 years after Independence we still face starvation. We need to empower our counties to be able to produce food enough for themselves” he said.

Moreover, he hinted that the county will also get special food for malnourished children and the elderly in the county. He also revealed the government’s plans to have the region covered by more irrigation projects.

The CS was accompanied to the region by Baringo Deputy Governor Jacob Chepkwony who promised to conduct capacity building for farmers and residence to enlighten them on alternative forms of food of agriculture.

Baringo became the first county to benefit from the relief aid in the second phase of the food distribution exercise.