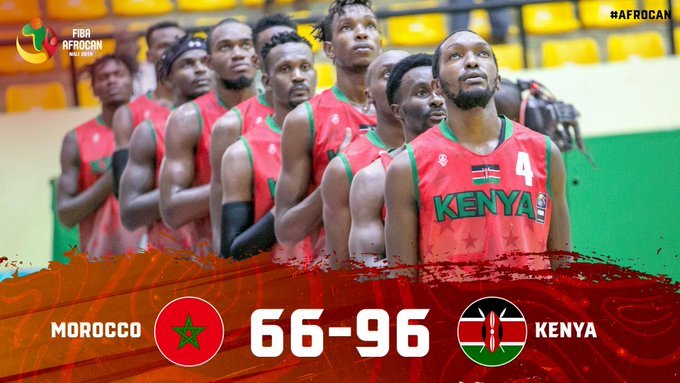 The Kenyan National basketball team Kenya Morans shocked the continent with a comfortable victory over Morocco to reach the finals of the FIBA Afrocan finals. The team cruised to a 96-66 win over the North Africans to book the first appearance in the finals.

🇰🇪 2nd OT win for Kenya!! The #Morans shock Tunisia to advance to the Semi-Finals! 🙌 #AfroCan

The team will now face off with the Democratic Republic of Congo in the final. As Always Kenyans back at home were quick to congratulate the history makers through their various Social Media accounts.

Final: #Kenya 🇰🇪 96-66 🇲🇦#Morocco#Morans are through to the final!

THE MORANS ARE IN THE FINAL!!

Even the football accounts took notice..

The Kenyan point guard Eric Mutoro had 5/7 3 pointers in the first quarter..

Congratulations are in order to Team Kenya for the win against Morroco !#lingerieday pic.twitter.com/wJojEM9T4l

Congratulations team Kenya, you made us proud. #Morans

The Morans achievements were made to look even better when compared to the Men’s football team Harambee Stars who could not even make it out of their group in the recently concluded Africa Cup Of Nation Tournament.

Guess who had a budget of Ksh. 244m to prepare and still embarrassed themselves.

The final will be played on Saturday. We wish our boys the best of luck. IT’S COMING HOME!