Senegal’s coach Aliou Cisse is not unfamiliar with the African Cup Of Nation final match. Indeed, the dreadlocked manager was a key part of the team that last played an AFCON final in 2002.

Against Cameroon 17 years ago, the match ended in a stalemate after extra time and the match was decided on penalties. El Hadji Diouf missed Senegal’s 4th penalty that left Cameroon leading 3-2. Up next was Aliou Cisse who’s task was to convert Senegal’s last penalty kick and even the scores.

He missed and in effect handed the indomitable Lions the African Title.

That unfortunate miss has been his driving force ever since he took the reign as the first-team coach in 2015.

“Our philosophy is to take a game at a time and try to play the best football to erase the disappointment of 2002. It’s a dream to win the AFCON title not only for Cissé but for all the Senegalese people. We are one step away from realizing this dream that we could not achieve in 2002,” he said ahead of Friday’s final. 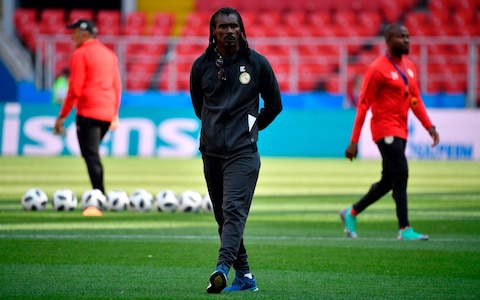 The 43-year-old has an abundance of talent in his squad and it will be a shame if they fail to win the prestigious title this year. Senegal has never won the African title but has been in five semi-finals since that 2002 disappointment.

The Teranga Lions will, however, have to make do without their best defender Kalidou Kouilibally who is serving a suspension after picking up two yellow cards en route to the final.

Can Senegal make history by winning their first-ever AFCON crown? Share your thoughts in the comments section below…