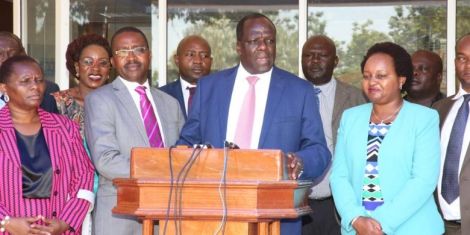 An announcement by the Senators and Governors to hold protests in Nairobi has left many tongue waging. Have roles drastically changed ? It is no longer the poor citizens demonstrating, asking for better roads and better health facilities or the normal ouster of a unpopular and corrupt politician from the seat.

It is now the turn for those in power, the rulers of the country .It is the turn of  those expected to make things done at the click of their fingers to hit the road and maybe,their turn to smell teargas.

Governors claim that the counties have been staring at a dark future because they do not have funds to perform any function.

Speaking on Friday, the Council of Governors stated that the stalemate of the Division of Revenue Bill, 2019, between the National Assembly and the Senate was threatening to cripple devolution.

“We will join senators, on Monday, and protest against the National Assembly for ‘killing’ devolution.

“What we are experiencing today is equivalent to what happened in 1966 when the leadership killed majimbo,” Bungoma Governor Wycliffe Wangamati ranted.

A section of  Kenyans who took to the social media to celebrate their decision, have gone forth to warn the leaders against disrupting business on the said date.

See what Kenyans have to say on the governors and senators demonstrations;

8th Wonder of the world!
Will they sing ‘hakiii Yetuuuu’

Tupatane hapo ma citizen. In the lead will be @CarolineMutoko kazi kwetu #kot

Ha ha ha…..i hope they know how angry Kenyans are with them.

Haha we will join them and change the aim of that protest.