Former Kakamega Senator Boni Khalwale has hit out at Kenyan MPs demanding for extra allowances from what they usually get saying they should leave their celebrity syndrome.

Speaking on Tuesday morning when he appeared at NTV’s amlive show, Khalwale said that legislators have a celebrity mentality once they get elected and instead of socializing with their fellow Kenyans in their usual places, they opt for more expensive joints.

Khalwale also blamed a section of citizens whom he said are encouraging greed by the MPs since they keep waiting for them outside parliament asking for money from them. He said that he didn’t have problems with what the MPs earn as long as it reflects what they do.

In a leaked memorandum to the SRC, the MPS are seeking to have their car grants doubled from the current Sh5 million to Sh10 million, increase their mortgage entitlements, extend their medical cover to more than one spouse and retain huge car maintenance and mileage allowances. 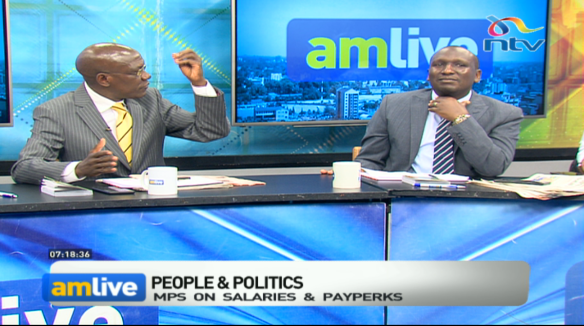 “When they get a car grant of 5 million shillings they don’t want it they want a higher value car, if we allow them that they will start asking for a helicopter grant,” said Boni Khalwale.

He said that MPs will not quench their thirst of wanting to be given more and more at the expense of the taxpayers.

MP allowances: When they get a car grant of 5 million shillings they don’t want it they want a higher value car, if we allow them that they will start asking for a helicopter grant. – Boni Khalwale #AMLiveNTV @debarlinea pic.twitter.com/DrmxkJ52rP

Khalwale insisted that the legislators will never get satisfied and instead will continue siphoning Kenya dry in order to gather their expensive lifestyles. he also jokingly acknowledged Otiende Omollo MP Rarieda welcoming him back to the country after spending a number of days in Egypt watching Afcon at the expense of taxpayers money.

“And to my brother Otiende Omolo, welcome back from Celebrity behavior of watching Afcon in Egypt something where the taxpayer was paying. Do you know how many of your age mates back in Rarieda would have loved to watch that game in Egypt?” posed Khalwale.

Khalwale’s remarks were supported by a large section of online users who praised him saying that the former Kakamega Senator was for talking sense urging the lawmakers reconsider their selfish behaviors and stop demanding for more.

Here are some of the reactions”

Breaking News Boni Khalwale gets his brain back for a second or two. https://t.co/pNMqzIcKV8

@KBonimtetezi today you've spoken like an elder, If you continue like this, I promise you, you'll win every Kenya taxpayer's heart and vote..Please don't relent

Like how you paraphrases Mr @KBonimtetezi.now you know it clearly.
Show up