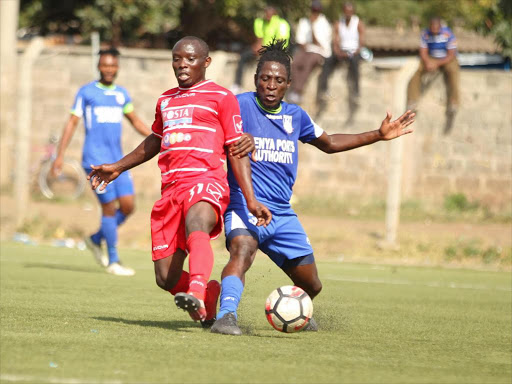 They did it the hard way but finally, Posta Rangers have confirmed their status as Kenyan Premier League participants for next season after a 3-2 aggregate win over Nairobi Stima in the promotion/relegation Playoff match. John Kamau’s side drew 1-1 in the second leg played at the Kenyatta Stadium in Machakos to follow up on their 2-1 win in the first leg last week.

Rangers took the lead in the 3rd minute through a Francis Nambute strike to calm any nerves that might have been present early on. Stima, carrying a loss from their home match and a goal down in the early stages of the second leg attacked with vigor but could not find a way through past the resolute backline in the first half.

The electricians however leveled matters 3 minutes after the restart through Derrick Oalo to give his side hopes of a memorable comeback. Posta Rangers, knowing that a draw would be enough, defended in blocks in the second half and limited Stima to only a couple of half chances. Stima pushed on for the goal that would have taken the game to extra time and possibly penalties but unfortunately for them, it never came.

Nairobi Stima will now have to make do with yet another season in the National Super League while Posta Rangers can look ahead to the 2019-2020 Kenya Premier League season which starts in late August.