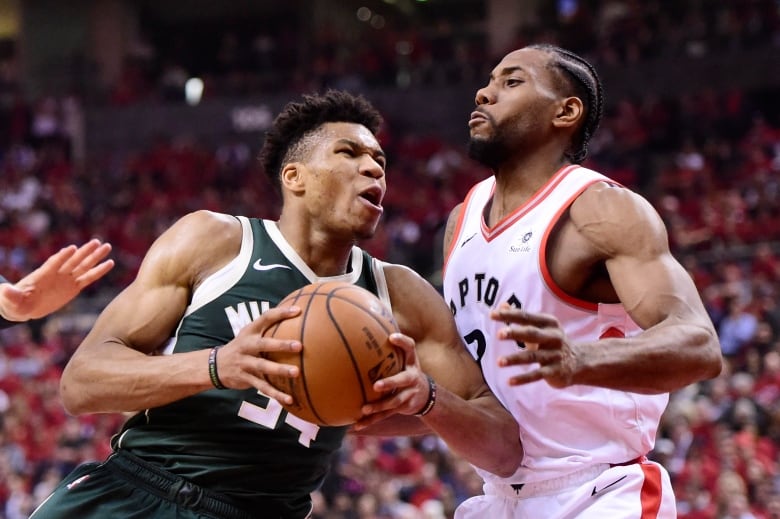 The Toronto Raptors closed ranks around hurting star Kawhi Leonard, turning in a total team effort in a 120-102 victory over the Milwaukee Bucks Tuesday to level the NBA Eastern Conference finals.

Kyle Lowry led the Raptors with 25 points and Toronto’s bench out-scored Milwaukee’s 48-23 as the Raptors followed up their double-overtime triumph in game three with a second straight home win.

They knotted the best-of-seven series at 2-2 with game five in Milwaukee on Thursday.

The winner of the series will take on two-time defending champions Golden State, who completed a Western Conference finals sweep of Portland to reach their fifth straight NBA Finals.

Leonard, who downplayed suggestions he was injured after the gritty game-three victory, looked hobbled at times — wincing noticeably after dunking on Bucks star Giannis Antetokounmpo in the third quarter.

Kawhi with the dunk on Giannis and one!!!🔥 pic.twitter.com/oHJ7MgMBmC

Leonard grabbed a pass from Spanish big man Marc Gasol and drove for the basket, Antetokounmpo’s move to stop him coming too late.
Leonard landed hard and held his left leg – although he would play on.

“I think he’s fine,” Toronto coach Nick Nurse said. “He’s logged a lot of minutes. He’s certainly tired, like a lot of guys in this series are.

Kyle Lowry (18 PTS) & Serge Ibaka (12 PTS) guide the @Raptors to a lead at the break in Toronto! #WeTheNorth #NBAPlayoffs

But Lowry said Raptors “understood” that Leonard wasn’t going to be 100 percent and knew going into the contest that “everybody has to step up and stay focused on the game plan.”

Midway through the 4th on @NBAonTNT pic.twitter.com/yHpsbfDz0x

Lowry scored 18 points in the first half as the Raptors came back from an early seven-point deficit to lead 32-31 after one quarter — pushing the lead to 65-55 at halftime.

The @raptors even the ECF 2-2 with 120-102 home W! #WeTheNorth #NBAPlayoffs https://t.co/rPFh8oYmhh pic.twitter.com/SKHWYMBUGs

VanVleet, who missed 16 of 20 shot attempts in the first three games of the series, connected on five of six from the field, draining all three of his three-point attempts.

“I think the first two games they really brought the intensity to us. They came out and were more physical were more active,” Powell said. “We wanted to change that narrative and protect home court. We wanted to come out with a lot of juice, be more aggressive, be more physical and take the game to them. I think we really did that.”

Toronto extended their lead to as many as 16 points in the third period and led by 13 going into the final frame.

But the Bucks lost their second straight game, something they did just once during the regular season.

Two home wins gave the Raptors some breathing room as they head back to Milwaukee, but Lowry said they’d done nothing more than hold serve.
“They did what they did at home and we did what we’re supposed to do at home,” he said.

“Our back’s against the wall still,” Lowry added. “We’re going into a hostile environment. They’re going to be ready to go.”

Antetokounmpo, meanwhile, said there was no feeling of panic among the Bucks.

“The feeling is not any different,” he said. “We’ve still got to get better, stick with our game plan. (We’ve) just got to play with more energy, execute better, but our feeling is the same.

"We've just gotta get better and stick to our gameplan."

“They did their job, they protected home, we’ve got to do our job now.”