Kiambu governor Ferdinand Waititu has accused his deputy James Nyoro siding with his rivals to taint his name.

He says that Nyoro didn’t defend him over the controversial county audit report presented to the Senate.

Waititu who was speaking in Juja while commissioning tarmacking of Juja farm road accused Nyoro of ganging up with his political opponents to tarnish his name by peddling falsehoods on the county’s financial expenditure. 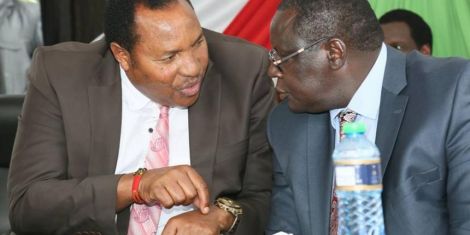 “I expected my deputy to be the first person to defend me when I appeared before the Senate committee but instead he joined my enemies in tarnishing my name,” Waititu said.

Waititu’s accusations came just days after Controller of Budget Agnes Odhiambo gave Kiambu county and several other counties a clean bill of health after admitting that IFMIS system had a configuration problem that affected several counties.

According to Odhiambo, the IFMIS configuration problem was to blame for the mistake that caused uproar in the country.

The controller of budget said the IFMIS system did not have an arithmetic error as said earlier but a configuration problem that ended up giving erroneous reports which affected several counties. Kitui, Kakamega, Garissa, Kirinyaga, Kwale, Lamu, Nyamira and Samburu are among the counties which the IFMIS made erroneous allocations for State House affairs.