World Marathon Champion Eliud Kipchoge has not less than once made Kenya happy, with his latest big win being the award for the Athlete of the year, awarded by IAAF. But now, will Kenya be able to scoop such wins in the near future? Well, Athletics Kenya president Major Rtd Jackson Tuwei has told athletes to keep performance-enhancing substances to salvage the country’s integrity.

He regretted that the country has moved dangerously close to getting banned by the International Association of Athletics Federations (IAAF) because of increased doping cases.

Tuwei who was speaking in Ol Kalou, Nyandarua, on Wednesday noted that Kenya has been upgraded from being only on the IAAF’s watch list of a suspect country to ‘Category A’. 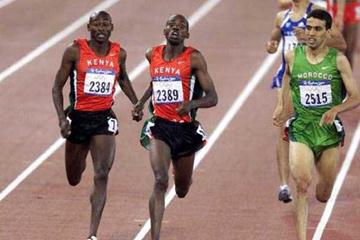 “Only four countries in the world are in Category ‘A’ and Kenya is one of them. For four years running, we have been on the watch list of IAAF, but that has been upgraded because athletes don’t want to listen to advice on doping,” he said.

“Some athletes have been getting new documents with reduced years so as to compete in the junior championships. This is criminal and it’s not acceptable,” Tuwei warned.

The national AK treasurer David Miano, who is also the chairman of the Central Region that covers Nyandarua, Nyeri, Murang’a, Kiambu and Kirinyaga, told runners to expose those helping them to dope.

“You know who is involved and which chemists are selling those drugs. Tell us so that we can deal with them,” Miano said.

He said AK grassroots officials are from now on going to be spies to help catch the people involved. He said several athletes from Nyahururu had tested positive for doping.

Miano also told athletes to be careful when using supplements, saying some could be laced with performance-enhancing substances.

He asked the IAAF to change its regulations so that federations are allowed to publicly name and shame those caught doping in their countries.

Miano told athletes to consult doctors pooled by AK under the Kenya Doctors Network so that they can be treated with medicine that does not contain IAAF banned substances.

If they were to be named publicly, do you think Kenya will lose much of its athletes?