Education CS Amina Mohammed has unveiled new tougher measures that she hopes will help curb the run away exam leakage currently being reported in the ongoing KCSE exams.

The Education boss announced the new measures on Thursday after releasing, inspecting and monitoring Kenya Certificate of Secondary Examination papers at an examination centre in Lang’ata, Nairobi.

While pointing out that no examination paper has leaked out so far even though several people have been charged with exam malpractice, Ms Mohamed said the new measures will seal loopholes exploited by masterminds behind examination leaks. 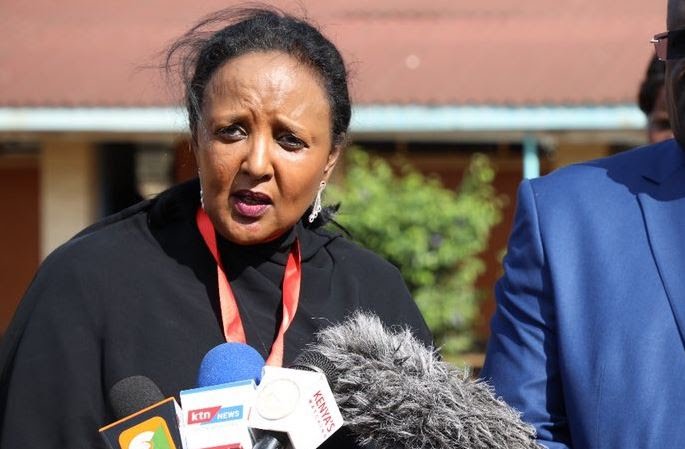 “Failure to adhere to these guidelines and many other broad ones that have been already issued earlier on will lead to severe punishment,” the Ms Mohamed said.

Ms Mohamed said supervision teams have noticed a few missteps that need immediate correction and ordered that all school gates be kept wide open throughout the day during exams to allow easy monitoring.

Secondly, security officers “must sit at positions where they have a full view of the examinations materials for the second papers as the first exam is underway.”

Thirdly, all examination officials have also been cautioned against taking any time off, including for tea breaks, when the exams are underway.

Lastly, exam centre managers have been ordered not to allow any unauthorized teachers or persons to hang around school compounds when the exams are going on. Ms Mohamed said the new measures, if adhered to, are guaranteed to end exam irregularities.

The CS confirmed that all exam papers have been delivered to all exam centres with Kenya National Examination Council features. She also pointed out that all suspects arrested in connection with cheating or leaking of the national examinations will face the full force of law.

So far, the CS said that 15 people have been arrested and arraigned for allegedly opening the second paper prematurely in Kisii. They allegedly photocopied and planned to write exams then sneak answers to candidates.