Germany International Bernd Leno is ready to grasp the opportunity with both hands as an injury to Petr Cech opens up a chance for the goalkeeper to establish himself as first-choice at Arsenal.

Cech limped out of the 2-0 Premier League win over Watford on the stroke of half-time having pulled up in pain following a goal-kick.

Leno, a summer signing from Bayer Leverkusen, replaced the Gunners captain to make his league debut and produced a couple of smart saves as a late Craig Cathcart own goal and a Mesut Ozil strike earned the points for Arsenal.

The 26-year-old has had to be patient for his chance to impress head coach Unai Emery, who has preferred the experienced Cech since taking over at the Emirates Stadium.

Now he is expected to turn to Leno, who is ready and raring to make his mark in the Premier League. 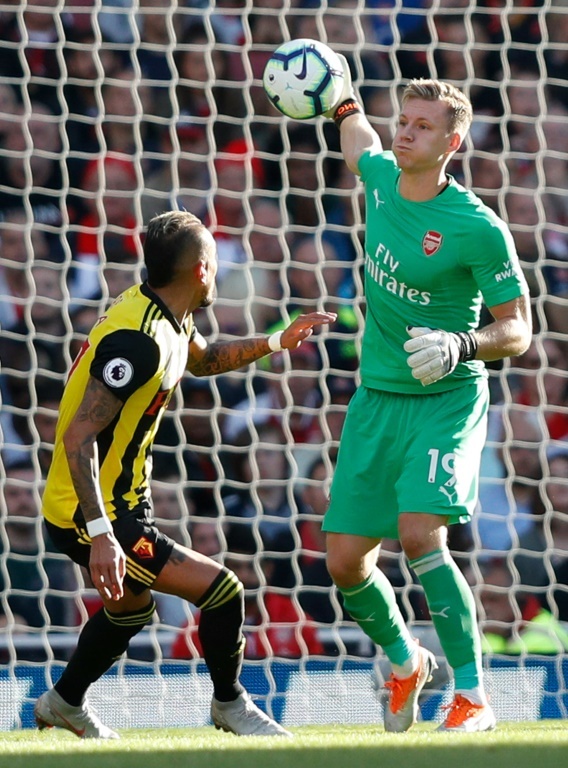 When asked if he was excited by the chance to establish himself in Cech’s absence, he replied, “Yes, of course, now Petr is injured , I don’t know for  long, I have the opportunity to play more games and show the coach my quality. It is a big chance for me, I don’t want to say it wrong that I am happy for Petr to be injured, I think always it is a bad feeling so I feel sorry for him but now I have more opportunities to play and I will concentrate on the games.”

While it was a surprise to some that Leno did not instantly take his place as Arsenal’s number one after moving to England, Leno admits it may now be beneficial for him to have been eased into life at a new club.

The German Shot stopper said, “I wanted to play all games, the first games against City, Chelsea and West Ham. It’s difficult to sit on the bench but the coach said to me don’t be disappointed or sad, just train hard. He has worked with many goalkeepers and, like I said before, the goalkeeper is a very special position. It needs a little bit more time for your personality and confidence and feeling with the defence.I was calm and worked very hard every day. I’m happy that the coach gave me some games in the Europa League and Carabao Cup.”

Leno  continued, “He said to me it’s good to get a feeling for the team and also for the football because it is different and needs a little bit of time. The coach gave me the time. I didn’t play so many games so the two games in the Europa League and Carabao Cup were very important for me to get the confidence with the defence, get a feeling with the team and also for the players to play from the back. So it was good for me that I already played those two games in the cups.”

Leno is likely to play in Arsenal’s Europa League tie against Qarabag in Azerbaijan next week, although Emery may be tempted to wrap him in cotton wool and select Emiliano Martinez instead.