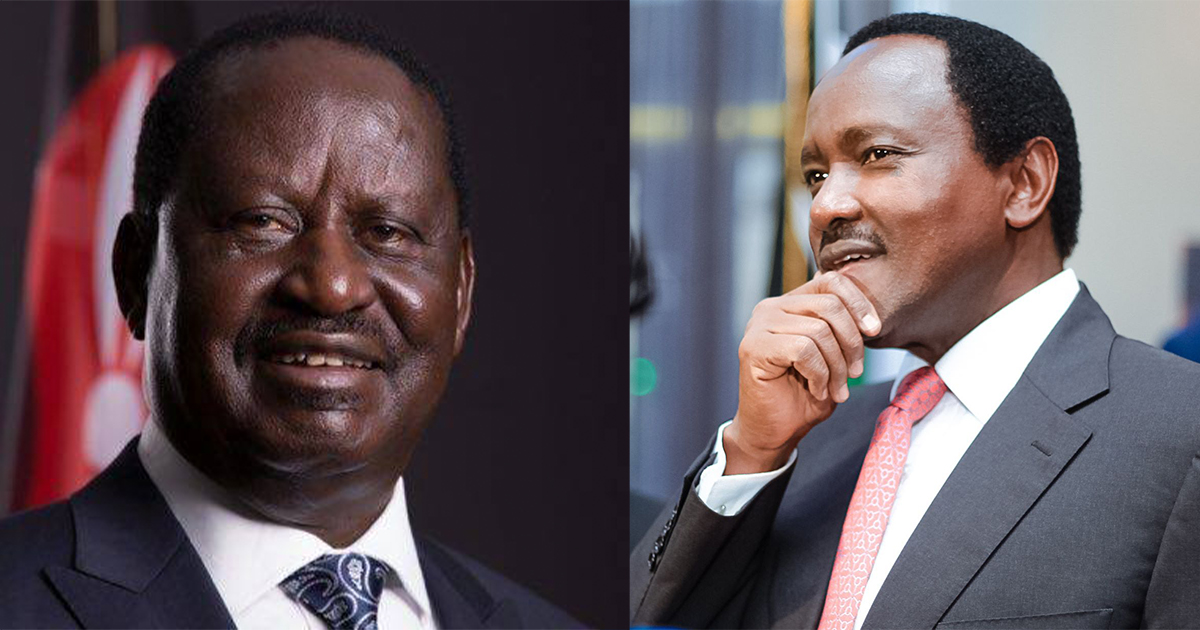 Kalonzo’s decision to forego his bid came two days before Independent Boundaries and Electoral Commission(IEBC) was set to clear him. This inevitably complicated Ruto’s equation in the race for State House since the Wiper leader reportedly has 1.6 million voters.

After keeping his supporters guessing for two weeks, Kalonzo accepted his nomination as Chief Cabinet Secretary if Azimio wins the August elections. A position he had previously rejected after Raila picked Narc Kenya’s Martha Karua as his running mate.

Interestingly, Martha Karua was not in Nairobi to receive Kalonzo Musyoka neither was she in an Azimio rally in Nairobi Eastlands to consolidate support in the city hours after Kalonzo threw weight behind Raila Odinga’s State House bid.

However, on her social media, she welcomed the former Vice President and looked forward to working together under the leadership of Raila Odinga.

“Was not able to make it back to Nairobi on time for the rally but my heart was with you.” She said.

What do you think of Kalonzo’s decision to rejoin Azimio-One Kenya coalition?

Deputy President William Ruto has a date with the electoral commission for clearance tomorrow against the background of the questions he has raised about the integrity of the voters’ register.

Ruto claimed one million names in the voters’ register were missing, a claim the polls agency dismissed later in the day, saying this represented the number of people who had requested to change their voting stations.

The DP claimed that most of those affected were from Kenya Kwanza Alliance strongholds, linking the development to an alleged plot to interfere with the polls in favour of their opponents.

Inside the deal that saw Kalonzo rejoin Azimio coalition

Wiper leader Kalonzo Musyoka has secured Cabinet slots and a commitment of law change to create the post of Prime Minister, which he will hold, should Azimio presidential candidate Raila Odinga form the next government.

This was part of the deal Mr Musyoka brokered to seal his return to Azimio after initially protesting his being snubbed for the post of Mr Odinga’s running mate, which went to Narc Kenya leader Martha Karua.

It also emerged that a last-minute intervention by President Kenyatta facilitated Mr Musyoka’s return to the fold and his acceptance of the Chief Cabinet Secretary position that had initially been earmarked for him.

The Musyoka camp might also get the Foreign Affairs Cabinet Secretary post he once held during the Kanu regime.

Sources indicated other ministerial positions fronted by Mr Musyoka are those of Energy, Water, Health and Tourism.

A Kenya Kwanza sitting governor’s wife has confirmed that she will be campaigning for Azimio la Umoja One Kenya Presidential candidate Raila Odinga and not Deputy President William Ruto.

Hellen will also be asking her supporters to stand with Raila and not DP Ruto, her husband’s preferred choice ahead of the election.

She said her one vote is firmly secured for Raila despite her husband being DP Ruto’s Nyanza region coordinator.

According to media reports, Obado’s wife made the remarks on Thursday, June 2 when she was cleared to run for the Migori Woman Representative seat as an independent candidate.