Baringo Senator Gideon Moi rose up of his political career after receiving the mantle of leadership from his deceased father, President Daniel Moi.

Rungu ya Moi has since then been the charm that has earned Gideon attacks and criticism from his political rivals.

On Wednesday, the prodigal son of Moi was on a mission to interact with common Wananchi at Kiambu County, where he announced his candidacy for 2022 presidential elections.

This trip provoked Deputy President William Ruto’s Ally who advised Gideon on how to interact with hustlers. 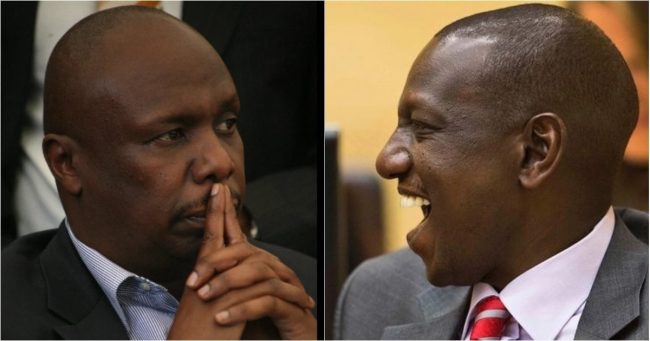 Denis Itumbi, who is one of the digital Media strategist in Ruto’s team told Gideon that it was too late for him to discover Kibandaski, a place where humble citizens eat.

According to Itumbi, Moi’s son should land in a market with a chopper and 40 cars motorcade and buy all vegetables like a hustler.

1. You are RICH – sell RICH. That is all you have been since you were born, too late to discover kibandaski

2. If you want to identify with Hustlers, no need to do Kibandaski, land in two choppers, do a 40 car motorcade, buy all vegetables hapo Soko

During the burial of Veteran Politician Nginyo Kariuki on Tuesday, the legislator hinted that Mount Kenya region will Support Gideon’s presidential bid.

“To you Gideon I want you to know we got the message and all our eyes are on you. Please revive Kanu and we shall be with you,” said Wamuchomba.

Additionally, Gideon was advised that believing in the words of Wamuchomba is a risky path to take.

Finally, @MoiGideon I wish you well in the race. God Bless Your Campaign. I promise you, that is my last tweet on your campaign. For now, may the Jogoo crow, ikifika jioni we will serve dinner. Siku njema & believe @honwamuchomba at your own risk! I saw she endorsed You! pic.twitter.com/hyz9Np1Mb0