Deputy President William Ruto’s office has again found itself in a tight corner after a man came out to claim that he was conned in a Ksh317 million fraudulent deal in Harambee Annex.

In an exclusive interview with Opera News, Stephen Ngei Musyoka narrates how he was lured by the fraudsters who even had the guts of holding two meetings in an office based on the third floor of the Harambee Annex building.

He also revealed that efforts to get DP Ruto and share with him the predicament he has gone through have hit the wall as powerful individuals around him have been blocking them ever since the deal went sour.

It all started in early 2018 when Mr Musyoka, through his business partner Charles Kamotho, decided to contact various offices with the aim of getting a tender or contract.

“Through our contacts we ended up meeting with the fraudsters who told us that they will help us win a contract of supplying laptops to the office of the Deputy President and we liked the deal,” Mr Musyoka explained.

According to him, their first meeting with the fraudsters, who appeared to be well connected and very formal, took place at a local hotel that is based in Karen, Nairobi County.

In the meeting, Mr Musyoka states that he never read clues that he was about to lose millions as those he met with were so presentable and drove in high-end cars. In addition, they even paid the bills.

Asked what was the agenda of the meet-up, Mr Musyoka highlighted that they were to hand over their company profile to the group which would later secure a meeting with the DP in his Harambee Annex office.

A few days later, they received an email sent from the office of the DP, through noreply@deputypresident.go.ke- informing that their company’s profile was being scrutinized by the procurement team.

“We are in receipt of your company profile. The same has been forwarded to the Procurement team, for mandatory pre-qualification evaluation. Consequently, pursuant to your application, please be advised that (Makindu Motors Limited) has been shortlisted to participate in the year 2018/2019 tenders under the office of the Deputy President,” the email sent on Friday, May 2018, read in full.

To make the deal appear genuine, the suspected fraudsters not only used the official email but also signed it off with the DP’s official logo and address.

After the email, Musyoka and his partner received a call and were invited to the office of the DP with a directive that Mr Ruto wanted to meet them over the laptop project.

On the fateful day, they arrived at the Harambee Annex where someone was already waiting to usher them in.

“We were taken to a room in the building and asked to wait because the Deputy Head of State was attending to some visitors,” he narrated.

However, they were not able to meet Ruto as they were informed the DP had hurriedly left to attend to some emergency issues.

Mr Musyoka narrated that it is then that they were given a 12-page contract to sign and show their commitment to delivering the needed 2800 laptops.

The contract, which is in our possession, appears to be genuine and it equally has official logos on each page.

On June 18, 2018, the company received a purchase order that was signed by S Mulinge, who introduced himself as a procurement assistant in the office of the DP.

The purchase order states that Mr Musyoka was supposed to ensure he delivers the 2800 laptops at a unit price of Ksh82,931 within a period of seven days.

In relation to the price, Musyoka raised concerns that the pay was so little and demanded that they increase the price per unit to Ksh115, 400 which was agreed on – he also received an email confirming the same.

The businessman then started the process of raising the funds to purchase the machines and even secured a loan from a local bank in the country.

“I bought 200 laptops locally but the rest of the machines I was forced to import them from Dubai because they were not available in the country,” he claimed. 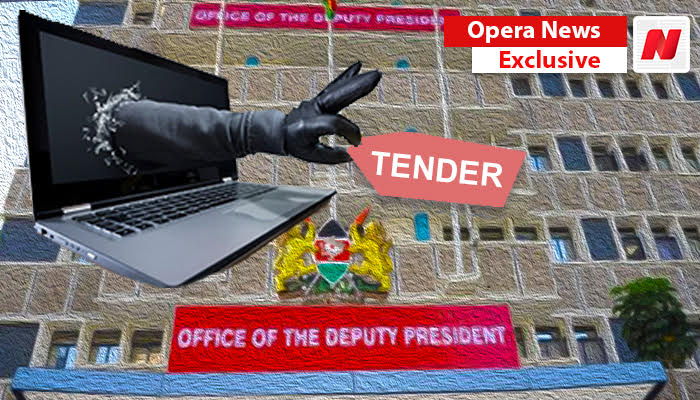 All the machines were imported and taken to a godown based in Eastleigh, where officials from the DP’s office were supposed to pick them up.

Mr Musyoka confirmed that the machines were picked up by one Allan Chesang, who was accompanied by two uniformed police officers.

“Every time he went to pick the machines he was accompanied by two police officers who provided security,” he stated.

On July 26, 2018, the purported office of the DP confirmed that it had received the laptops and they were all certified as genuine.

“We thus thank you for the successful delivery of 2065 pieces as per the terms in the contract signed. Further, any invoicing must be accompanied by the attached copy of the inventory report,” the email read in part.

However, things turned to the worst when he started demanding for his pay following the successful delivery of the laptops.

Musyoka says that he was at some point disturbed that he went to the office of the DP in relation to the matter but was not attended to.

“That is when I realized that something was not okay. I tried to reach those who used to call me but my calls went unanswered,” he stated.

He then decided to report the matter to Athi River Police Station and investigations into the matter started.

At some point, he revealed that he became frustrated with how the police were handling the matter.

“When I started pressuring them up, they then raided a home where Mr Chesang lived and were able to get 720 laptops which are under custody,” the businessman narrated.

He added it was out of the pressure that the police dragged Mr Chesang to court but so little is being done to ensure that he gets justice.

“I am Ksh300 million poorer, I lost the laptops, I cannot reach DP Ruto and share the predicament I went through and no one cares about my well-being. It is a sad experience,” he lamented.

For Mr Allan Chesang, life goes on and if all goes well and his political dream comes true by 2022, he might be seated in parliament representing Kwanza Constituency.

In the last elections, Mr Chesang vied for the elective post on an independent ticket but lost to Ferdinard Kevin Wanyonyi.

A name search on Google leads one to a number of fraudulent cases reported by various media houses where Mr Chesang is involved.

Such a report was published on August 14, 2019, where Mr Chesang was arraigned in court for obtaining the laptops in question.

Chief Magistrate Martha Mutuku ordered that he is remanded at the Industrial Area Remand Prison after it emerged that he had severally failed to appear in court claiming he was admitted at Kenyatta National Hospital (KNH).

In another report published by The Star on October 4, 2019, the main suspect was arraigned alongside three others namely Teddy Awiti, Kevin Mutinda and Johan Ochieng where they denied that they tricked Mr Musyoka.

On August 14, 2018, K24 reported that police raided Mr Chesang’s home in Loresho, Nairobi County, where they found 651 laptops that he fraudulently acquired.

The officers also found high-end vehicles branded with stickers from the office of the Deputy President and those reserved for Members of Parliament.

However, in a rejoinder over the huge recovery, Mr Chesang told The Standard that the laptops belonged to Teddy Awiti and that he was only storing them for him at a fee.