Soi MP Caleb Kositany on Saturday expressed his opinion on the Building Bridges Initiative(BBI) saying that he fully supported the initiative but, he, together with others were not going to follow the ODM Party leader around.

The MP who had accompanied Deputy President William Ruto to Cherengany in Transnzoia county said, “we are in BBI for the BBI purpose but not to follow Raila Odinga.”

Reiterating his stand, Kositany said he would not fail to attend the BBI rallies for he knew the real meaning and truth behind the initiative which was, unfortunately, being taken advantage by a few. 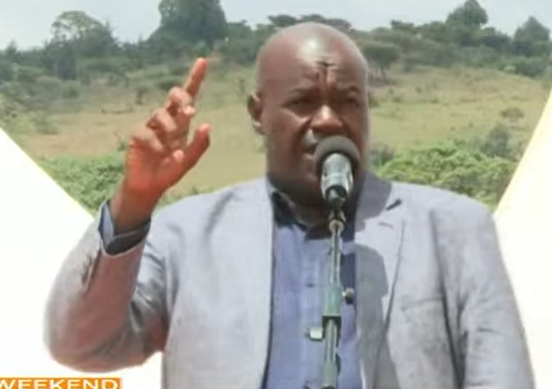 Ruto, on the other hand, urged Raila Odinga to allow the citizens to have a say in the BBI drive since it was an inclusive initiative and refrain himself from divisive politics.

He further added that he has no problem with people who want to continue engaging in politics in the BBI drive but insisted that the common Kenyan be given a chance to air his or view.

In a tweet, Mutua said that the remarks by the lawmaker are unacceptable and ill-intended. He argued that time has come for leaders to send a message of unity and not division.

“Peace-loving Kenyans should condemn and reject the divisive and confrontational tone in the @TheRealBBI debate such as what’s being championed by people like Kutuny. BBI is for uniting the nation, not dividing people,’ he said.

Kutuny in Mombasa had torn into Elgeyo Marakwet Senator Kipchumba Murkomen and his fellow Tanga Tanga politicians accusing them of hypocrisy and dishonesty.

He went ahead and demanded an apology from Ruto’s allies for allegedly disrespecting and insulting ODM leader Raila Odinga.

He said that for Kenyans to move on, tanga tanga politicians must apologize to the former premium for branding him a ‘witch’.