Former Jubilee party Vice-chairman David Murathe’s remarks that President Uhuru Kenyatta might remain in power, but in a different capacity, after the expiry of his presidential term in 2022 on Monday elicited fierce reactions from Kenyans.

Speaking to Nation on Sunday, Murathe rekindled the talk of President Kenyatta going nowhere after the expiry of his 10-year term.

This did not go well with most Kenyans on Twitter (KOT) who expressed their opinions and concerns with some accusing Murathe of being hypocritical. 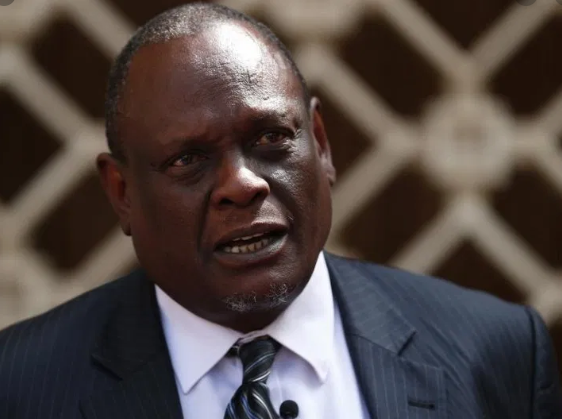 According to netizens, President Kenyatta should be left alone to retire with dignity like Kibaki who up to date we still celebrate his achievements.

Some dismissed Murathe’s remarks saying that he should stop tarnishing President Kenyatta’s name by putting him in the league of Mugabe who had to be overthrown by the Army.

Murathe should stop tarnishing President Kenyatta's name by putting him in the league of Mugabe who had to be overthrown by the Army. They should allow him to retire with dignity like Kibaki who up to date we still celebrate his achievements. pic.twitter.com/H2aSJJv4F6

Why can't Murathe be the PM 2022 since he claims he is Deep state in Chief? Why can't the Deep state fix the country's economy since they seem to have the magical touch to all our problems ama yao ni ku-decide who becomes CEO KE in 2022?

How do these old politicians reason at times?This why Kenya will lag behind and never achieve anything. Murathe should retire and look after his grandchildren in peace. Let him not throw his mud on us, rather he should direct it somewhere.

This idiot" Murathe is still in the 19th century; obsessed with mediocrity! https://t.co/LMg57iD4Tb

To all president Uhuru kenyatta affiliates jameni let's stop this kind of stupidity hii Kenya does not belong to one or two families Uhuru kenyatta and Raila Odinga should Retire peacefully someone should tell this idiot David Murathe #wajinganyiyi pic.twitter.com/SBvh2aAru5

According to Murathe, the President will be free to vie for any post and could even claim the proposed post of Prime Minister once the Building Bridges Initiative (BBI) report is implemented.

He asserted that President Kenyatta will still remain the party leader of Jubilee come 2022 daring anyone who wants to challenge him as party leader to come out.

On matters of corruption, Murathe supported the proposal by the party’s secretary-general Raphael Tuju on blocking leaders accused of corruption from vying.