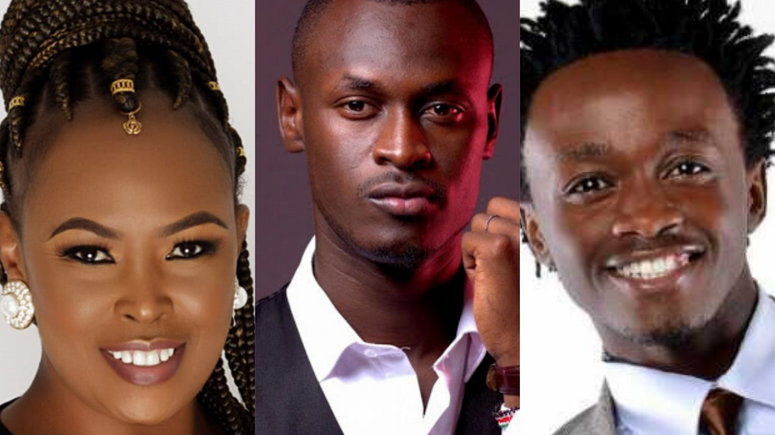 Kenyans who were on high alert responded swiftly, reminding them of the role they played in placing the current regime in office and told them to keep quiet.

Former Queen of the mic also took to twitter stating that the song was a must listen to.

The EMB CEO also took to Twitter where he posted a photo of Wajinga Nyinyi, with the caption “A Voice Sent By God @RabbitTheKing 🔥🔥🔥 #WajingaNyinyi Vote Wisely”

Netizens who keep records of everything resurfaced photos of them during jubilee campaigns.

For Caroline Mutoko, who was in a company of  President Uhuru, Ruto and Julie Gichuru, was attacked and accused of being one of those people who has profited from the Government. Netizens demanded her to take a back seat and let others complete the journey.

Netizens did spare Bahati they accused him of being a hypocrite and told him that he and corruption were under the same category.

They reminded him of stooping so low and supporting the Government when he sat on the president’s seat and even stepped on his stool when he was performing at Kasarani.

Here are some of the reactions.

@CarolineMutoko ,do you remember this and does your stomach churn??? pic.twitter.com/A0Rla6piEB

Are we saying that no human is allowed to rescind or learn from their past mistakes Amina? Is that what hypocrisy is? Kenyans are owning up to have made a mistake with the ‘tano 5’ movement. The country is a mess & only Kenyans can make amends. Jana ilikuwa Bahati, Leo Caro 🤦‍♂️🤦‍♂️

I wonder what you were doing here pic.twitter.com/vtzi0B5QtB