Kenya National Examination Council(KNEC) on Wednesday lost one teacher marking Kenya Certificate of Primary Education(KCPE) after he succumbed to a short illness.

In a statement released by KNEC, the examination body confirmed the teacher’s death and offered their condolences to the teachers family.

“It is with profound shock and regrets that Kenya National Examination Council(KNEC) announce the death of Robert Kiua Muindi who passed on the last night.,” reads in part the statement by KNEC.

According to KNEC, Kiua suddenly fell ill at the marking centre in Nairobi and was rushed to PCEA Kikuyu Mission Hospital where he was pronounced dead. 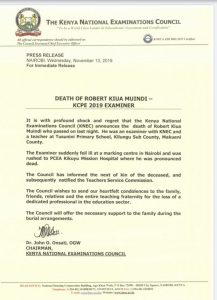 KNEC also said that the deceased next of kin and employer, Teachers Service Commission, have been notified of the death.

The examination council promised to support the family in giving the deceased a decent burial.

The sad news comes at a time when the marking exercise is reportedly expected to come to an end on Friday.

The KCPE results are reportedly expected to be released next week.