A billboard placed on the Transnational Plaza building at City Hall Way of a lady with ‘period’ blood smeared on her face has caused a huge online uproar.

The person on the billboard is a woman living with a disability who is seen holding a menstrual cup that has seemingly spilled the blood on her face.

The audacious picture is part of a new campaign dupped #Endperiodshame which has been advocating for girls with disabilities and creating public awareness.

Posting on their social media page, the people behind the campaign (Genesis, Voice and Confidence sanitary pads) revealed that the campaign wants to normalize menstruation conversations and they are leaving no one behind. 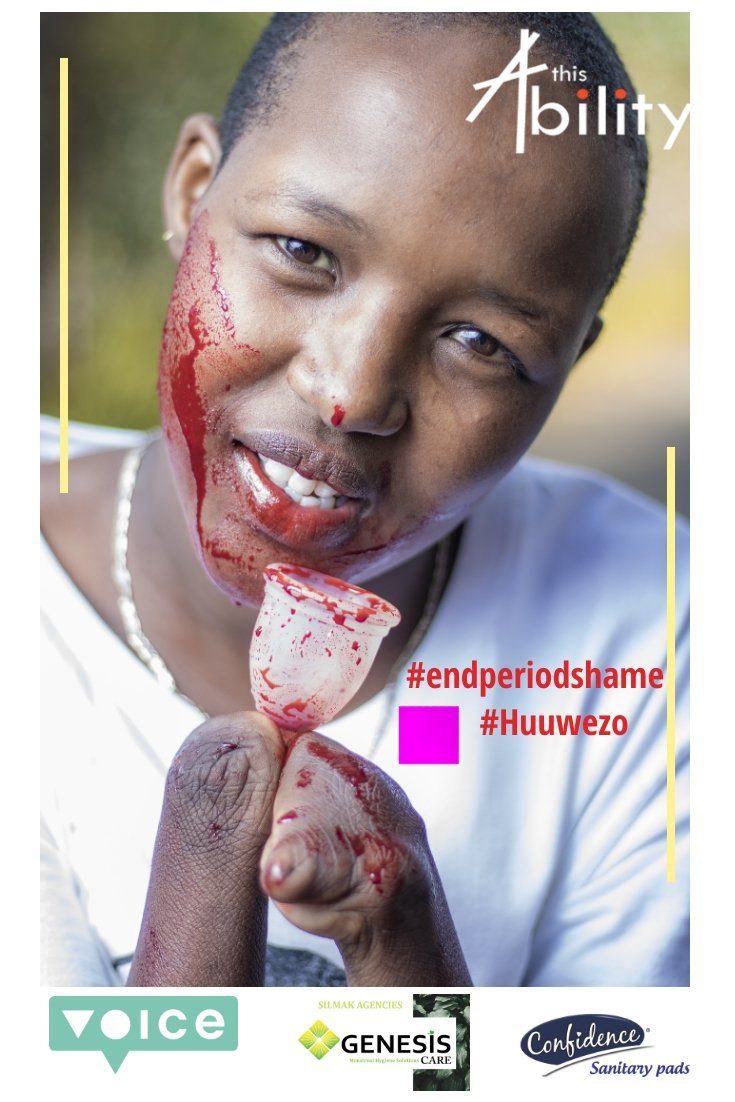 What many are not aware of is that women and girls with disabilities experience menstruation too, and they face challenges when it comes to menstruation because they lack access to quality information.

With its brazen billboard, the campaign seeks to face the period taboo in the face and also question how comfortable Kenyan ladies are with their periods and menstrual blood. It will also make people aware that while menstruation is difficult for many women, having a disability can add another layer of difficulty. In addition, it sparks conversation about how ladies/girls with disabilities handle menstruation as it is a topic people rarely think about.

As expected, the operation has attracted backlash from a section of Kenyans who feel that the billboard is just unpleasant because the woman in the picture has menstrual blood on her face which is considered disgusting by many.

Others declared that the lady in the billboard uses her mouth to remove the period cup while others felt that the message was good but the execution was poor.

Taking to social media a section of Kenyans who had interacted with the billboard aired their sentiments which you can check out below:

“There’s an #EndPeriodshame billboard on Transnational Plaza that is quite puzzling. I like the message, but why is there blood on the girl’s face? What am I missing?” Read the Tweet.

Many Kenyans sort to understand what the campaign tried to justify with some claiming the poster as gross.

I think your creative execution could have been better!!! There will be a lot of backlash to this execution

First of all, she is obviously a girl with a physical disability.
She has no fingers and experiences menstruation just like you. Fortunately for you, you are able to use your fingers to remove and insert the menstrual. She uses her mouth. Now, do the math.

How does she use her mouth? I am puzzled.

I really did not want to comment about that billboard.
Have seen this one though.
Better execution? pic.twitter.com/wUgCzXU6Ck

Period would get to your face if you had no fingers like her.
People clearly (probably) don’t think people with disabilities menstruate

Wataka Damaris Deww The point of the advert was this, blood is blood. It does not matter where it came out from. We cannot continue with this our double standard mentality where we can easily circulate photos of people hacked to death and covered in blood, or new born babies still unwashed and be okay with it but we are not okay with period blood on your face. If you were born of a woman then you all have had vaginal blood and other fluids covering every inch of you. But you did not say anything then. In fact, you depended on it for survival. But suddenly, you are an adult, you can afford sweet-smelling soap and expensive deodorant and now period blood on your face is revolting? Please. I wish we practised the same kind of reservation when it came to sexual practises. Blood is blood is blood. No matter where it oozes from. Your body is one, your heart is one and so is the bloodstream. Stop with the bogginess yoh. People are actually dying from period shaming. 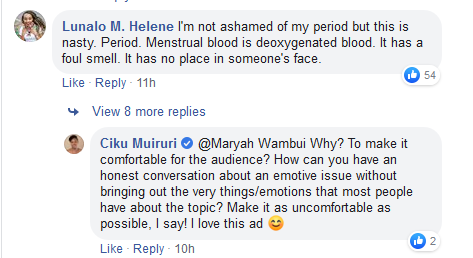 Wambui Murage There’s no shame in periods. Society is creating shame. We survived n I don’t c y others r not surviving. It’s just a creation. How does period blood go to the face? It’s yuck.

Yvette Murunga This picture speaks more than just period on the face, the lady in that picture is abled differently, and I am assuming every month she has to go through the same ordeal of trying to maintain her hygiene and at the same time deal with the discomforts that comes with the end month visitor ,thank you ciku for this I now know better #say no to period shame

Alfy Tichy Mutai One thing we badly need today is for people to be compassionate rather than judgemental. Anyone can blame but it takes a good heart to feel.our sisters should never be ashamed of there menstrual blood.

Ryan Gitau Njeri I have never been disgusted of menses, or even felt ashamed about them, but this picture makes me feel yuck… so it doing the opposite for me, there was surely a better way of driving the message home… rather than this😣😣😣

Karimi Christine Why a girl with a disability? Why the mensural cup? It looks like she spilt it on herself because of her disability… all in all, I think the people who want to make periods acceptable are overdramatic and have lost the point. The experiment with ladies walking with a stained dress was more informative and effective…. this is just NASTY!

Njeri Nderi I think the same message could have been passed differently and more realistically as I fail to see how menstrual blood would end up on one’s face..also, why are we using a person with a disability to pass this message? Seems like entrenching stigma to me. And finally, isn’t the cup she’s holding supposed to be a solution? Here it looks like it’s part of the problem. I mean, I don’t get this campaign frankly