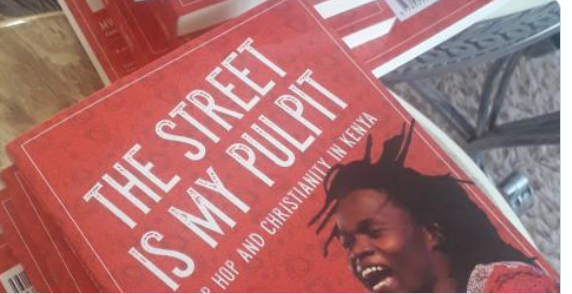 Kenya’s renowned musician Juliani has finally joined a list of notable Kenyans in authoring a book.

The elated rapper announced this good news on his social media pages on Thursday. The book “The Street is my Pulpit-Hip hop and Christianity in Kenya” is his first.

He has now joined a list of ‘jack of all trades’.From activism to acting, to singing and now an author.

Juliani grew up in Dandora Estate and life was miserable and tough for his family . The harsh life and conditions in the ghetto made him realize from a young age, that he had to work extra hard, to free himself from the shackles of poverty.

Juliani has had a share of problems in matters relationship, In 2018,he and the love of his life, Brenda Wairimu parted ways with no drama and Kenyans only noticed after they stopped posting photos of one another.

“Brenda and I had a lot of issues and we were not together for a while. And then I felt there is the importance of a family and a foundation… a place we call home, a place where you can lay your head. I realized I needed to make a decision and make things happen,” he said.

2019 has been a good year for Juliani. He, who at one time was one of the most sought after musicians in the country has been doing lesser shows which equate to low income, something that forced him to come up with a various creative way to lure clients and maybe stay relevant to the now competitive celebrity industry.