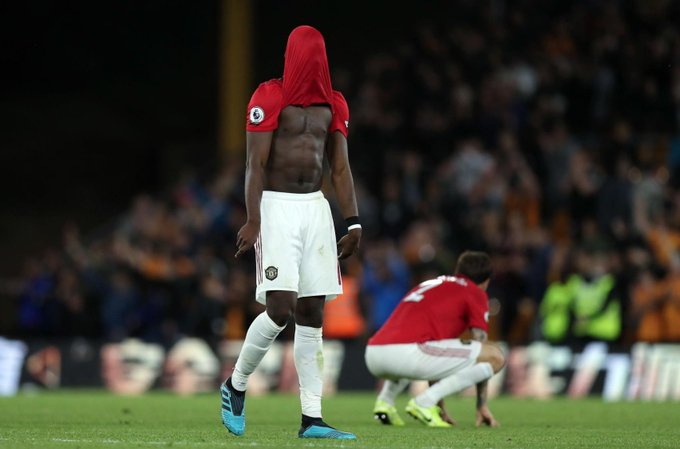 Manchester United fans have criticized their boss Solskjaer Ole Gunnar for protecting Paul Pogba after losing a penalty against Wolverhampton Wanderers on Monday.

United got a good chance to bag three points at Molineux Stadium to go top of the table but blew it out when Pogba’s powerful spot-kick was saved by Wolves keeper Rui Patricio, who guessed the right way and kept the ball out of the net to preserve the 1-1 draw.

Marcus Rashford was the designated penalty shooter against Chelsea in their opener last week when he was fouled by center-back defender Kurt Zouma in the box. After a short consultation with the Video Assistant Referee, the center referee Taylor pointed to the spot and Rashford made no mistake.

And United fans fumed when they saw Pogba losing Monday’s penalty against Wolves. However, Solskjaer downplayed it when he was asked why the Frenchman took the penalty over Rashford.

But he received a backlash for his statement, with a section of fans describing him as a weak coach. Check out some of fans’ reactions;

Shithouse answer, trying to please too many to keep his job, name a pen taker and get on with it.

One designated penalty taker per team. Not 2 ! Ridiculous and seems weak to me.

We are a finished club

No control of the dressing room, can’t be everyone’s mate. Ferguson was right about Pogba years ago. The fact he has to do this shows Pogba’s lack of respect to him the club and teammates

That’s a sign of managerial indecisiveness. Designate one penalty taker and end that clownery.

That’s poor by OgS to be fair. There should be just one & stop the comedy capers at every penalty

The Manager should make the decision for them . Pogba usual himself over team

weak as piss answer. set a taker and leave it at that

That is pathetic! One season at most. Weak coach, unsuccessful team.

Why keep defending this @paulpogba for goodness sakes, he can’t hold the ball, he loses the ball a lot the same reason why a creative midfielder like Bruno Fernandes wasn’t brought in, and why doesn’t the manager just put his foot down to Rashford taking the pks, he’s never misse

Well as a manager he should have the balls to pick a designated penalty taker and stick with him, to scared to over ride his own players

Weak management. He should make the decision prior to the game. Players then know whose job it is, simple really. Grow a pair and make a decision