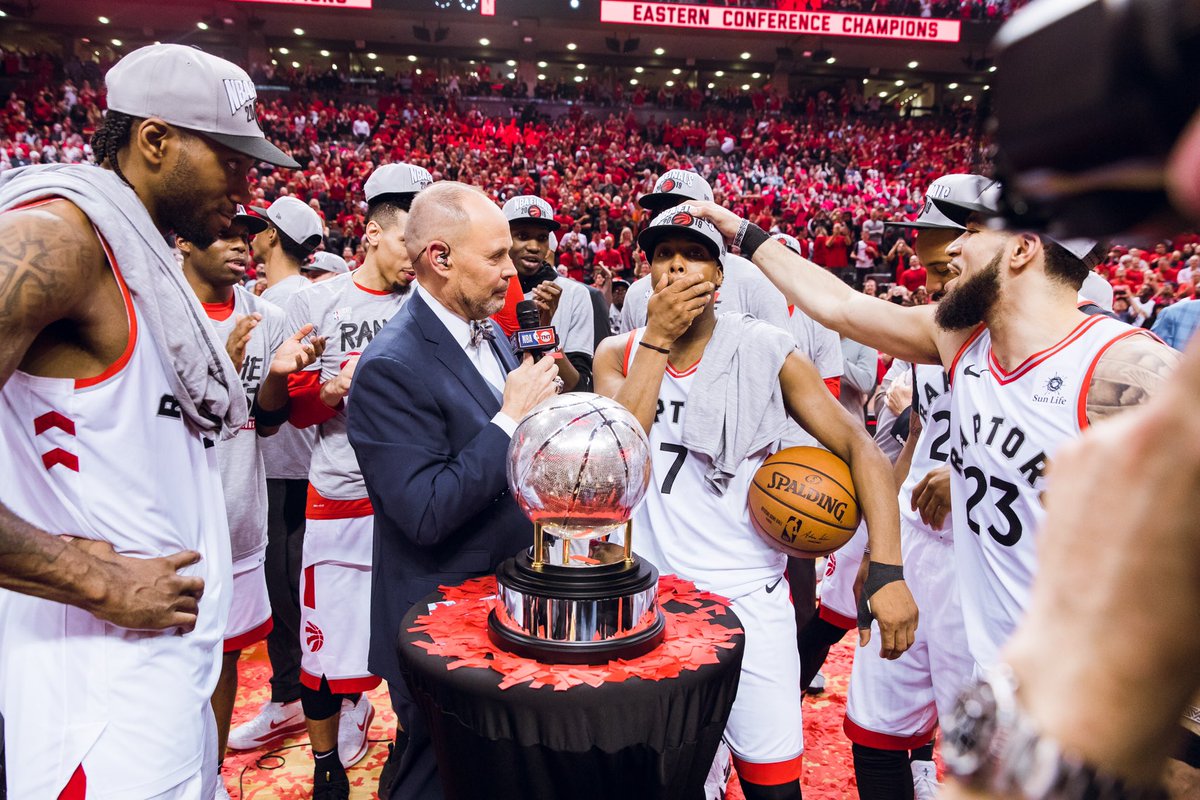 Established on November 4, 1993, when the NBA, as part of its expansion into Canada, awarded its 28th franchise to a group headed by Toronto businessman John Bitove for a then-record expansion fee of $125 million USD, the Toronto Raptors have struggled ever since to make it to the finals but they broke the barriers by conquering the Eastern Conference to make it to their first finals in Franchise history.

Kawhi Leonard finished with 27 points and a career high 17 rebounds as the Toronto Raptors advanced to their first NBA final with a 100-94 win over the top-seeded Milwaukee Bucks.

The Raptors won the series 4-2 as Saturday’s contest at Scotiabank Arena was a mirror image of game five, featuring a strong start by Milwaukee before Toronto came back in the fourth quarter to close it out with several clutch plays down the stretch.

The Raptors reached their first finals in their 24-year history where they will face the two-time defending champion Golden State Warriors. Game one of the best-of-seven final is Thursday in Toronto.

👀 the top 2nd half buckets from the @Raptors as they storm back to advance to the #NBAFinals Presented by @YouTubeTV! #WeTheNorth #NBAPlayoffs

“I just took it one possession at a time,” Leonard said. “We kept fighting all game. The calls were not going our way, but we kept striving and striving.”

The victory has galvanized the Canadian city’s sports fans and touched off a wild celebration among the crowd of 19,800 in the arena and tens of thousands more in the downtown “Jurassic Park”, who watched the game on a giant screen.

Canadian Prime Minister Justin Trudeau said he will be cheering on the Raptors. After he tweeted that it was time to take the Championship to Canada.

History made! @Raptors, it’s time to bring that championship to Canada! #WeTheNorth

Leonard won the head-to-head battle against Giannis Antetokounmpo, even dunking over the mighty “Greek Freak” with six minutes left in the fourth to give Toronto a 87-79 lead.

🖐️ @kawhileonard's 27 PTS, 17 REB, 7 AST in the Game 6 win propel the @Raptors to their first ever #NBAFinals Presented by @YouTubeTV! #WeTheNorth #NBAPlayoffs pic.twitter.com/MxsK8RSjal

Leonard also hit another dynamic three-pointer from his favourite corner spot on the floor with three minutes left to make it 95-90.

🖐️ ANOTHER LOOK AT THE KLAW! 🖐️#WeTheNorth 89#FearTheDeer 86

He shot nine of 22 from the field and had seven assists for the Raptors, who roared back to win four straight games after falling into an 0-2 hole to begin the series.

Pascal Siakam’s defensive read earns your Heads Up Play of the Day! pic.twitter.com/1g9rnAhIjA

Pascal Siakam tallied 18 points, Kyle Lowry finished with 17 and Fred VanVleet came off the bench to score 14 points in the win.

“I’ve been here seven years and this means a lot,” said Lowry. “This group is so special.”

Toronto was down by 15 points at one stage in the third quarter before Leonard and his supporting cast cut the deficit to five entering the fourth. 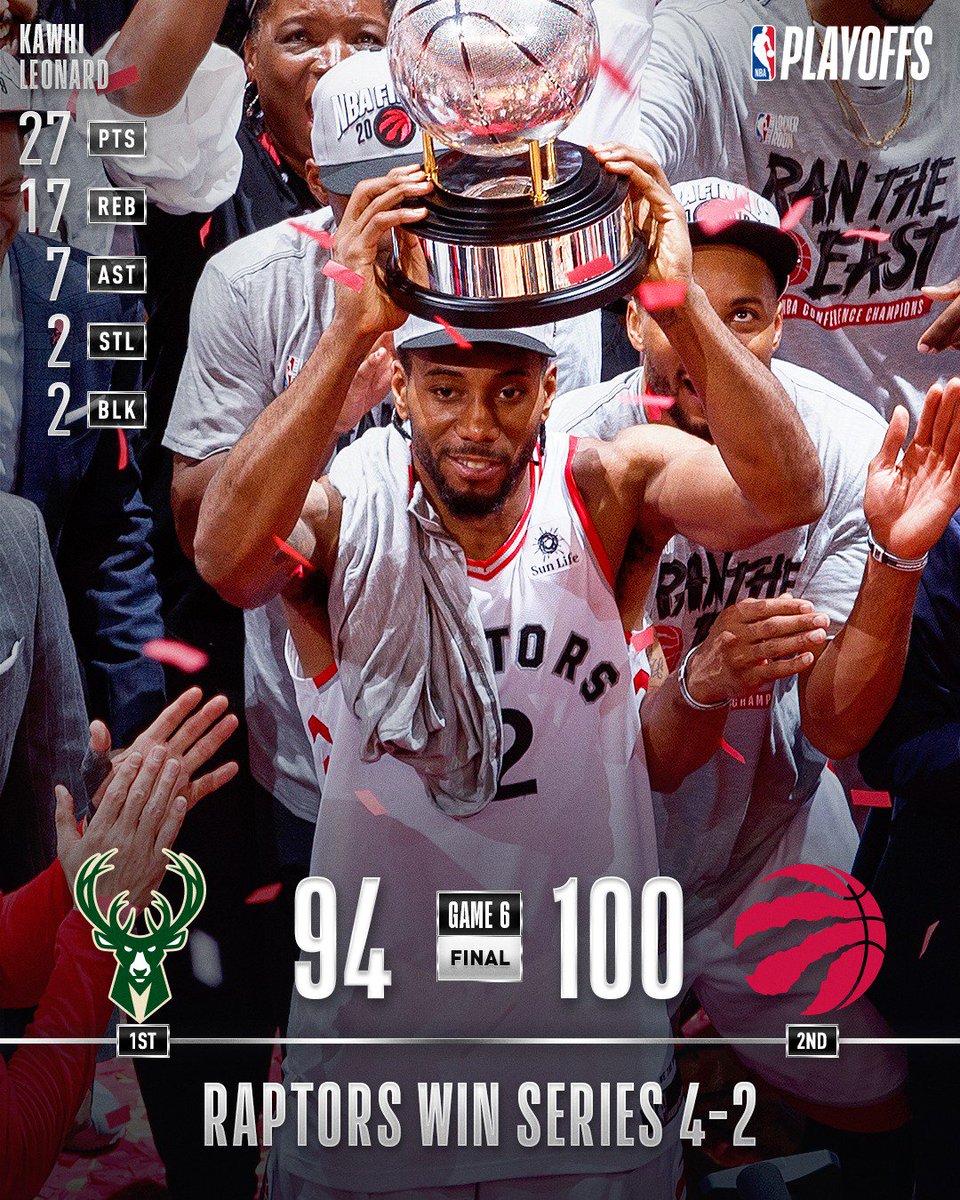 “We thrive at it. We enjoy the moment,” Leonard said. “My teammates have my back. I was on the bench to start the fourth quarter and they came back. It was a collective effort.”

🚫 GIANNIS COMES ACROSS FOR THE BIG DENIAL! 🚫

End of Q3 in Toronto:#FearTheDeer 76#WeTheNorth 71

Antetokounmpo tallied a double double with 21 points and 11 rebounds for the Bucks, who lost in the NBA playoff semi-finals after finishing with the best record in the regular season.

"This is my story…"@Giannis_An34 & the @Bucks visit Toronto (trail 2-3) for Game 6 TONIGHT on @NBAonTNT (8:30pm/et)! #FearTheDeer #NBAPlayoffs pic.twitter.com/3gwmVwMaIa

We’re LIVE with Giannis Antetokounmpo and Khris Middleton after the Raptors eliminated the Bucks from the #NBAPlayoffs. https://t.co/afWt6ikcww

“The game plan was to double-team me and not allow me to get into a rhythm,” Antetokounmpo said. “We weren’t able to rebound the ball and get easy points in transition and that’s why we lost the lead.”

Leonard said they were looking forward to putting their winning streak on the line and hosting the Warriors for the first two games of the final.

“Man, they are the champions. We got to go in there with mental focus and enjoy the moment,” he said.