The case in which Kenyan lawyer Assa Nyakundi is accused of killing his son Joseph Bogonko has taken a new twist.

This comes after his wife Lydia, who was set to testify against the lawyer, recanted her earlier statement implicating her husband.

In court submissions by her lawyers, Mrs. Nyakundi says she has accepted the situation and moved on. She says she wants to reunite with her husband. 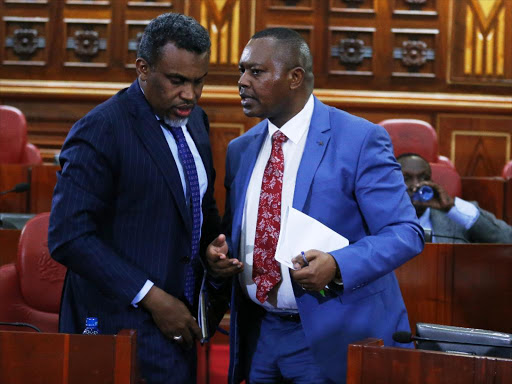 Nyakundi shot and killed his youngest son on March 17th under mysterious circumstances.

While Nyakundi claimed he was holstering his firearm when he accidentally shot his son inside the car, an autopsy report suggested otherwise. The report says Bogonko was shot from outside the car.

His wife and eldest son Noah Nyakuru had been lined up by the prosecution to testify against him.

Nyakundi had been charged with manslaughter but the Director of Public Prosecutions (DPP) withdrew the charges with a view of preferring murder charges against him.

This is after it emerged that detectives assigned to investigate the killing allegedly engaged in a cover-up in order to have Nyakundi face lighter charges.

Mrs. Nyakundi now says she considers the death of her son as an “accident” and wants her husband to be set free since he is “innocent.”

This is a big blow to prosecutors, who hoped to use Mrs. Nyakundi and her son’s testimony to nail the lawyer.

“What you (prosecution) are doing to Nyakundi is wicked, immoral and completely unacceptable. We cannot destroy a family in this manner. We are destroying Nyakundi’s family, his wife is longing for her husband,” her lawyer John Khaminwa adds.

“No woman in her senses, knowing or having any evidence that her husband is responsible for the death of her son, would want to have him back and share the same roof and bed. No woman would do such a thing. The woman in this particular case wants her husband back; the children want their father back.”