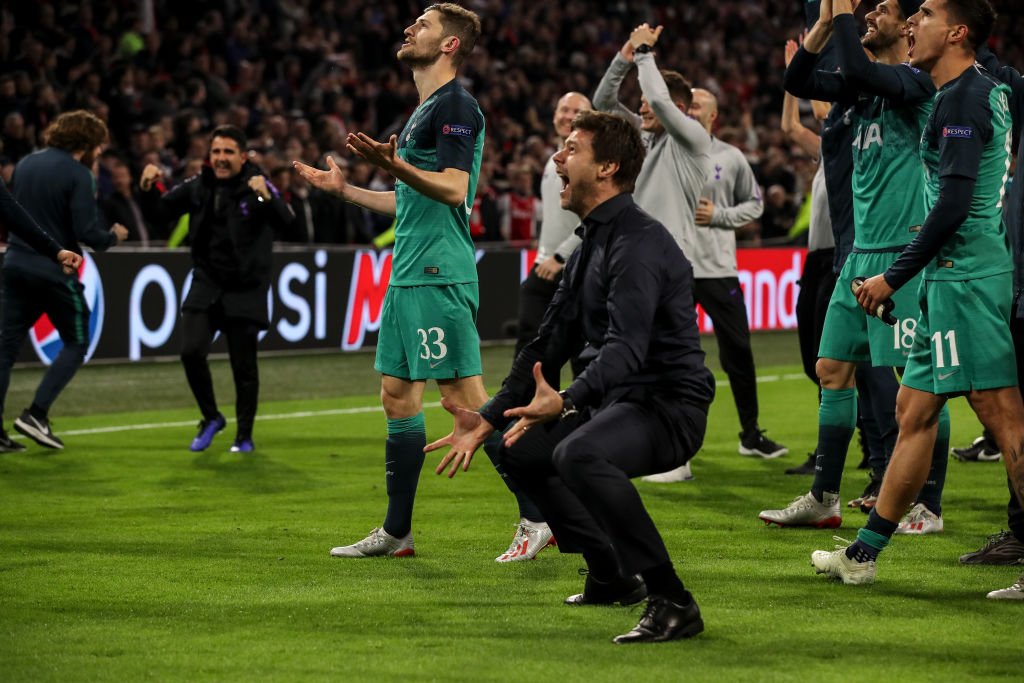 Spurs boss Mauricio Pochettino says winning the Champions League would change the “perception” of Tottenham Hotspur and provide a glorious ending to what he described as the best season in the five years he has been their manager.

The 47-year-old Argentine- who has said he may walk away if the club fails to deliver a blueprint for keeping them competitive with the top teams — has been praised for the style his team plays and his ability to develop young talent. But he has yet to win a trophy.

This missing element in his CV could be filled by beating Liverpool in the June 1 final in Madrid. Overcoming last year’s losing Champions League finalists and Premier League runners-up is a tall order. But history is beckoning, says Pochettino.

ABSOLUTE SCENES after the final whistle.

“I think we can make history,” he said after Sunday’s 2-2 draw with Everton which confirmed Spurs spot in next season’s Champions League by finishing fourth.

“We are creating history because we are making it, but if we can win we will write history and change the perception of this amazing club.

“Of course the club and the fans and we all deserve to be focused on the way and how we can win the final.

“That is the principle objective, there’s not another objective.”

Yet, Pochettino makes it to CL Final. pic.twitter.com/VwFIc2w8OQ

Pochettino says this has been their best season, since he arrived from Southampton.

Reaching the Champions League final and qualifying for next season’s campaign has been achieved, he said, against the odds as they did not invest in fresh faces either in the close season or the January transfer window.

Added to that many of his players only had a short break after the World Cup and there have been injuries to key players during the season, most recently to talismanic striker Harry Kane.

They were also delayed in moving into their state of the art stadium playing a large part of the season at Wembley.

“This group of players deserve so much credit,” said Pochettino.

“They have put so much unbelievable effort in. There have been many positives this season.

“The players and staff have shown so much character. We broke down all the doors when the circumstances were against us with the new stadium stuff.

“So to see their capacity to fight again makes me so proud. I think this is our best season in our five years.”