David Shearer, Special Representative for South Sudan and Head of the United Nations Mission in South Sudan (UNMISS)
World’s youngest nation, South Sudan which parted ways with the Upper part has been marred with wars and instabilities of political leadership making it hard for the nation to make any formidable and tangible developments for her citizens even under the watch of the UN.
This has made Riek Machar to go hiding from President Salva Kiir whom he has been deputizing after the two fell out.
But South Sudan’s rebel leader Riek Machar is planning to return to Juba in May under a power-sharing deal that a UN envoy said offered the “best chance” of ending the war. 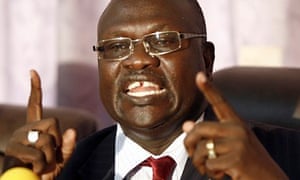 UN envoy David Shearer met last week with Machar in his exiled home in Khartoum to discuss plans for a transitional government that will pave the way to elections, under the terms of a peace plan signed in September.

“He told me that he is committed to coming back still at the end of May,” Shearer told a news conference at UN headquarters in New York, adding that his return will mark a “critical juncture” toward setting up the transitional government.

The peace agreement brokered by Sudan reinstates Machar as vice-president and is aimed at ending the brutal five-year war.

“There are some tricky issues still to be resolved,” said Shearer, who has been UN envoy to South Sudan since January 2017.
“But it’s an agreement that is there that we feel offers the best chance in a long while for moving South Sudan in the right direction.”
A visit by UN Secretary General Antonio Guterres to show support for the new peace effort in South Sudan had been planned for February but was pushed back to later this year when both Machar and President Salva Kiir will be in Juba, Shearer said.

President Salva Kiir and embattled his deputy Riek Machar
South Sudan descended into war in December 2013 when Kiir accused Machar, his former deputy, of plotting a coup.
Under a previous deal, Machar returned from exile with a group of bodyguards in July 2016, sparking a major battle in Juba that forced the rebel leader to flee the country after being targeted by government troops.

Shearer said security arrangements for Machar’s return from Khartoum had not yet been decided. Machar briefly returned to Juba in October to attend a peace ceremony.

Since the peace deal was signed, “fighting has diminished greatly”, said Shearer, prompting many South Sudanese who have sought refuge near UN bases to return to their homes.
About 193,000 people are sheltering at UN-protected sites, compared to 205,000 five months ago. The United Nations has about 15,000 troops and police serving in the peacekeeping mission known as UNMISS.
The war has uprooted over one third of South Sudan’s 12 million people and has seen horrific levels of sexual violence along with brutal attacks on civilians.