Nairobi County MCAs are now demanding answers from the Sh3 billion project to light up streets and estates after its implementation stalled.

According to the ward representatives, nothing has happened over the last six months.

On Thursday, Transport executive Mohamed Dagane said the project has “slowed down due to lack of funds.”

“I will not say it has stopped but it has slowed down. Maybe I can relate it to issue of financing,” Dagane said.

He was responding to queries from members of the Transport Committee.

Committee vice chairman Mark Mugambi said nothing has been going on in his Umoja I ward and demanded to know what was happening. Mugambi said poles have been erected in some areas but lights were yet to be installed.

“There is nothing going on there and it is not only in my ward. Nobody is explaining to us what is happening,” Mugambi said.

Mugambi chaired the meeting and said MCAs were under pressure from residents.

Dagane said City Hall had not received a status report for more than three months from Kenya Power and Lighting Company, the implementing agency.

The project was initiated by the Ministry of Transport in collaboration with the county government. It started more than one year ago and was to take two years to complete. It is being financed by the national government.

“Some substantial work has been done in terms of street-lighting across all wards. I know the work has slowed down,” Dagane said. 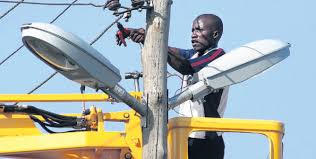 KPLC public relations officer Kevin Sang denied the project has stalled saying that it was going on, not only in Nairobi but across the country.

Sang promised to give a status report on the project but had not done so by press time.

More than 30,000 streetlights and high mast floodlights were to be installed along major roads in the city and feeder roads in the estates and slums.

The projects aims at enhancing security in the slums to enable residents do business on 24-hour basis. Several slums including parts of Kibera, Kawangware, Korogocho and Mathare are in the dark.

Lack of street lights has been blamed for rising cases of crime in informal settlements. Some gangs rob residents even in broad day-light.

Last month, residents of Kayole protested the reemergence of Gaza criminal gangs which terrorise them.

Dagane did not state the specific number of streetlights that were to be installed nor the streets targeted.

“At the moment, I can’t tell how many have been done in terms of numbers because we haven’t received the report from KPLC. It is something we are going to pursue,” Dagane said.