In a country where we seldom see convictions of the perceived ‘big fish’, the Thursday sentencing of Sirisia Member of Parliament John Waluke and his co-accused Grace Wakhungu served as a big shocker.

The duo will now pay a fine of Ksh.727 million or face a 10-year jail term each for defrauding the National Cereals and Produce Board (NCPB) Ksh.313 million through a company where the two are shareholders.

Ms. Wakhungu, who is the mother of former Environment CS Judi Wakhungu, was convicted on five charges which include uttering a false document by presenting a forged invoice, lying on oath during the arbitral proceedings and fraudulently acquiring public property.

The judgement is without a doubt a big step by the judiciary which has now demonstrated it can stamp its authority notwithstanding intimidation and political protection of corruption suspects.

Moreover, this gives some shreds of hope to Kenyans that perpetrators of graft can be punished if prosecutors present before the court substantial evidence that can lead to a successful conviction.

We can also pray that the ruling on Waluke’s case is the first of many successful prosecutions and a precedent that should make corruption as expensive and painful as possible. 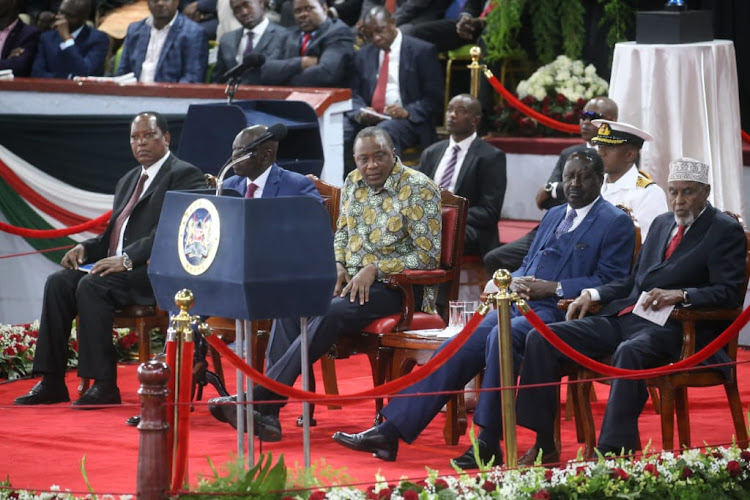 The much-anticipated BBI report might expand the Executive and create a Prime Minister’s office with executive powers, the Star has learnt.

The Star understands that the report recommends a radical departure from the initial report launched on November 27, 2019. President Uhuru Kenyatta told Governors that the decision to re-open the country’s economy will be informed by the level of preparedness by the devolved units to respond to Covid-19 infections.

The President said the decision will largely be determined by the counties’ capacity to effectively respond to new cases of Covid-19 imported into their territories.

Muthama, Kalonzo’s longtime ally and Wiper financier, has now called it quits and openly declared he will rally the region behind DP Ruto.

Today is the D-Day for the besieged Kirinyaga governor Anne Mumbi Waiguru with the special Senate committee investigating her impeachment set to table its report, setting the stage for debate and voting. The report from the committee will either uphold the verdict by MCAs to send her home or reverse it. Do you think Waiguru will survive her ouster today?