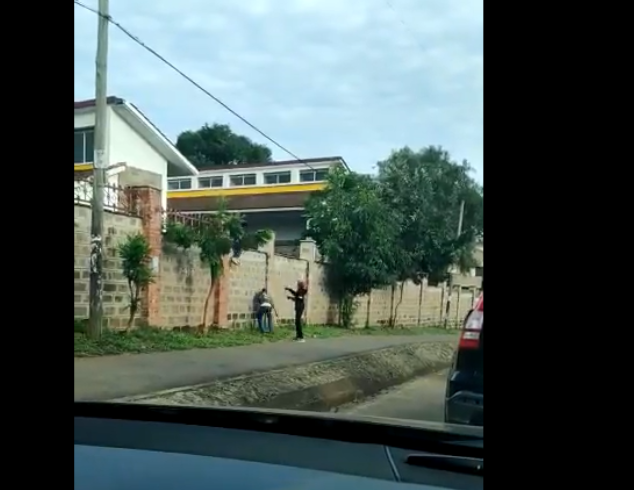 A new video has surfaced showing a group of Kenyans who were on mandatory quarantine at KMTC centre on Mbagathi, forcing their way out through a perimeter wall.

From what has been making rounds on social media, Kenyans especially those jetting into the country are fearful about being locked up in a Kenyan quarantine centre.

In a tweet posted by blogger Robert Alai, some Kenyans were seen throwing their bags and jumping through the wall dressed in some hoodies at Mbagathi.

Truth be told,  it is not easy being confined for so long away from one’s family, this explains why many people in quarantine have attempted  to escape.

Last week, dozens of people attempted to storm out of an isolation centre at Kenyatta University in Nairobi, citing unbearable conditions.

Concerns have been raised with many claiming that being held at some of these government-assigned facilities, with their living conditions are not much better than at a prison.

“The toilets are just messy, dirty… even the cleaners who clean the toilets once a day complain about how messy the toilets. It’s because there is no water, so people are touching the same taps when you want to wash your hands if there is even water… it’s just a mess.” one woman in quarantine told a local daily.

Forced to pay 2000 everyday in despicable conditions for something that was brought upon them as the government sits on donor Covid 19 money. They have the blessings of most Kenyans

Whoever was recording should have informed the relevant authorities. Kenyans shouldn’t water down whatever gains we’ve made.
“Its very irresponsible.”