In a press conference at Harambee House, the President confirmed that the two patients came into contact with the first patient who tested positive on Thursday.

“We have received confirmation of two more cases of the coronavirus the two have tested positive as a result of coming into contact with the first patient. Our health officials have already moved them into the KNH isolation facility.”

President Uhuru said that of the 27 people who came into contact with the first confirmed patient, only two tested positive for the virus.

“I want to assure Kenyans that any patient who has come into contact with this disease will be given full support to ensure that they recover,” Uhuru announced. 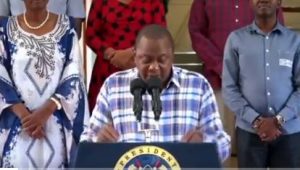 The announcement comes barely three days since the first coronavirus case was confirmed in the country.

The first case was confirmed on a 27-year-old female student who traveled back to Nairobi from the United States via London, United Kingdom.

The President also ordered the closure of all schools across the country.

“We have suspended learning in all our educational institutions with immediate effect.”

He directed that all students and pupils in boarding institutions be back at their respective homes by Wednesday, March 18, 2020.

President Kenyatta also directed institutions of higher learning in the country to halt the ongoing learning by Friday, March 20, 2020.

The head of state also issued a directive to employers to allow employees to work from home.

The World Health Organization (WHO) on Wednesday declared the outbreak of the virus a global pandemic.

Kagwe had announced that the government had effectively banned all public gatherings, adding that church services would be allowed to proceed as usual as long as congregants were provided with hand sanitizers.

He also announced that operators of public service vehicles had been directed to sanitize their vehicles regularly and provide hand sanitizers in all their vehicles.

Further, the CS warned traders against hiking the prices of food and medical supplies, and social media users against propagating alarming propaganda.