Deputy President William Ruto and his wife Rachel Ruto no-show at the Sunday’s beyond zero half marathon organized by the First Lady Margaret Kenyatta has raised eyebrows.

Unlike the past editions, Ruto and his wife opted to skip the entire event that took place at the Nyayo National stadium.

The two have been ever-present at the beyond zero half marathon ever since its inception in 2014.

Did you guys notice that Deputy presidents wife @MamaRachelRuto was missing in action today at the #BeyondZeroHalfMarathon? pic.twitter.com/akVv500b9D

This has further fueled the theory that President Uhuru Kenyatta and the DP have had an irreconcilable falling out.

The President graced the event that marked its fifth edition on Sunday and managed a 2.6km race before he was received at the finish line by the first lady.

First lady Margaret Kenyatta did not, however, take part in the race.

President Uhuru Kenyatta is received by First Lady Margaret Kenyatta at Nyayo National Stadium in Nairobi County for the 5th Edition of the Beyond Zero Half Marathon 2020 @BeyondZeroKenya | #BeyondZeroHalfMarathon #IWillRun pic.twitter.com/nFrmXfZ5dE

According to State House, the aim of this year’s edition is to improve maternal and child health and to reduce new HIV infections among children. 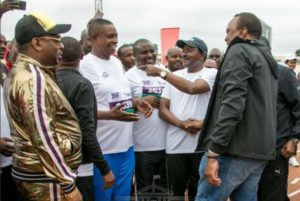