Deputy President William Ruto has pleaded with ‘the system’ to stop intimidating small politicians daring his attackers to go for him instead of threatening the junior politicians aligned to his camp.

Ruto who was speaking on Sunday, March 8, at Uganda Martyrs Church in Buuri Meru County, lashed out to unnamed senior government officials for allegedly threatening to arrest elected leaders siding with him.

According to Ruto, his allies have been receiving threats from senior government officials warning them of arrest and criminal prosecutions if they continue supporting him. 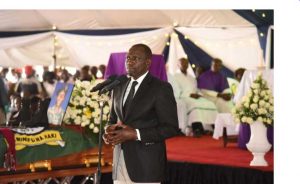 The DP also launched an audacious attack the senior government officials accusing them of being used to achieve political ends.

He asked them to stop using the criminal justice system to try and intimidate him and other political leaders allied to his camp.

“These public servants in our offices after we have given them jobs should work with the accordance of what their job description is. They should not be using the criminal justice system to try and achieve political ends to intimidate, blackmail and threaten people that this and that will happen or that will happen.”

Ruto further warned his opponents against inserting fears among his allies saying that every leader is free to choose a political side.

He has been attacking the DCI of late accusing it of been mobilized for political reasons, to discredit and destroy his office with all manner of nonsense, aimed at bringing him down.

The visit can be interpreted as part of Ruto’s strategy to test his popularity after the BBI rally.