The national carrier, Kenya Airways has been forced to respond after receiving backlash for suspending an employee identified as Gire Ali, who reportedly recorded a Chinese plane landing at Jomo Kenyatta International Airport on February 26.

In a statement, KQ admitted that they understood the public pressure generated by the incident while acknowledging that every Kenyan had the right to receive information about Corona Virus that would enable them to take necessary action for their own sake.

“Indeed, the nature of the coronavirus is such that the public has a legitimate interest in receiving relevant information to enable each one of us and our beloved nation to take the necessary steps in protecting ourselves and loved ones against the spread of the virus,” the statement reads.

The national carrier went on to reveal that the decision to suspend Ali was influenced by a letter from the Kenya Airports Authority (KAA) that detailed breach of airside security procedures. They further stated that the suspension would pave way for investigations into the matter in a fair and transparent manner.

This Chinese plane (China southern)just landed at the JKIA amid the Corona virus flight ban, Chinese media houses on the ground with masks while our Kenya Airways officials are unprotected.#CoronavirusOutbreak pic.twitter.com/ItAAj7JuCj

“As an operator at Jomo Kenyatta International Airport (JKIA), we are expected to adhere to the airport’s security procedures and regulations set by KAA as the airport regulator and which are prescribed by law,” they said.

“This process will be conducted expeditiously and in a fair and transparent manner, and in the meantime, the employee remains on full pay and retains all legal rights.”

KQ had received widespread condemnation from Kenyans for suspending Ali, whom they accused of poor handling and management of passengers arriving from virus-hit China.

“It has been determined that you be suspended from duty with effect from February 27, 2020 in accordance with provisions of clause 16.5 of the Company HR Policy Manual,” the letter signed by KQ’s Chief Human Resources Officer Evelyne Munyoki stated.

The disease has killed more than 2,800 people and infected over 83,000 worldwide.

Read the full statement from Kenya Airways below: 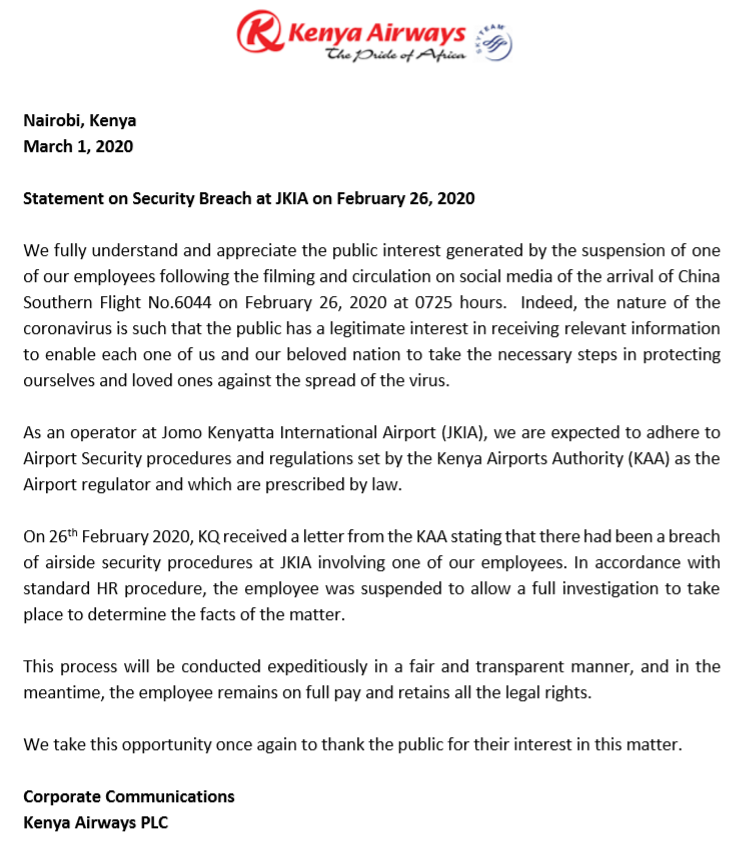